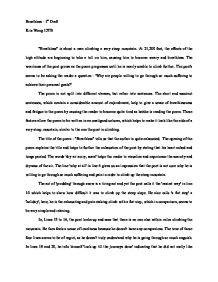 Breathless - 1st Draft Kris Wong 12TB "Breathless" is about a man climbing a very steep mountain. At 21,200 feet, the effects of the high altitude are beginning to take a toll on him, causing him to become weary and breathless. The weariness of the poet grows as the poem progresses until he is nearly unable to climb further. The poet's seems to be asking the reader a question - 'Why are people willing to go through so much suffering to achieve their personal goals?' The poem is not split into different stanzas, but rather into sentences. The short and succinct sentences, which contain a considerable amount of enjambment, help to give a sense of breathlessness and fatigue to the poem by causing the reader to become quite tired as he/she is reading the poem. These factors allow the poem to be written in an unaligned column, which helps to make it look like the side of a very steep mountain, similar to the one the poet is climbing. ...read more.

In, Lines 13 to 16, the poet looks up and sees that there is no one else within miles climbing the mountain. He then feels a sense of loneliness because he doesn't have any companions. The tone of these four lines seems to be of regret, as he doesn't truly understand why he is going through so much anguish. In lines 19 and 20, he tells himself 'look up till the journeys done' indicating that he did not really like what he saw previously and would rather not think about what lied ahead of him - endless miles of vertical rock. However, in line 21, he tells himself that he 'must look up', which is clearly a contradiction with the previous two lines. The contradiction is there because the poet is not sure himself if he wants to continue to climb up the mountain or not. Strong words such as 'faltering' and 'wrench' are used in lines 23 and 24 to help to show how tired the poet is and how his limbs are not really responding to his commands. ...read more.

There is an extended metaphor in the poem where the poet compares climbing a mountain with things people do in life. He doesn't understand why people willing to go through so much suffering to achieve their personal goals, which more often than not, just end up as memories. This poem reminds me of my past, when I used to train for ice skating competitions. It took me a long time before I could master some of the more difficult moves, often falling hard on the ice. This led to a lot of frustration and pain; however, I did quite well in some of the competitions. Sadly, I do not ice skate anymore due to time constraints and these events are only a distant memory to me. However, these memories are satisfying memories and I believe that people should try their very best, even if it means going through pain and suffering, to achieve their personal goals. ...read more.