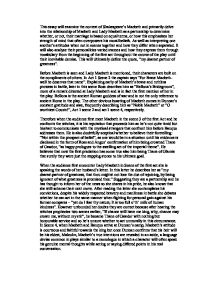 This essay will examine the context of Shakespeare's Macbeth and primarily delve into the relationship of Macbeth and Lady Macbeth as a partnership to determine whether, or not, their marriage is based on equal terms, or how this emphasizes her strength of mind that often overpowers his moral beliefs. As well as interpreting one another's attitudes when not in scenes together and how they differ when separated. It will also analyse their personalities varied stances and how they express them through vocabulary from the beginning of the first act throughout the course of the play until their inevitable demise. This will ultimately define the quote, "my dearest partner of greatness". Before Macbeth is seen and Lady Macbeth is mentioned, their characters are built on the compliments of others. In Act 1 Scene 2 the captain says "For Brave Macbeth-well he deserves that name". Explaining early of Macbeth's brave and ruthless prowess in battle, later in this scene Ross describes him as "Bellona's Bridegroom", more of a remark directed at Lady Macbeth and is in fact the first mention of her in the play. Bellona is the ancient Roman goddess of war and is not the only reference to ancient Rome in the play. The other obvious boasting of Macbeth comes in Duncan's constant gratitude and awe, frequently describing him as "Noble Macbeth" or "O worthiest Cousin!", Act 1 scene 2 and act 1 scene 4, respectively. Therefore when the audience first meet Macbeth in the scene 3 of the first Act and he confronts the witches, it is his reputation that proceeds him as he's not quite timid but hesitant to communicate with the mystical strangers that confront him before Banquo addresses them. He is also doubtfully sceptical whether to believe their foretelling: "Not within the prospect of belief", as one would be in a situation until his evidence is disclosed in the form of Ross and Angus' confirmation of him being crowned Thane of Cawdor, "as happy prologues to the swelling act of the imperial theme". ...read more.

"What beast was't, then, that made you break this enterprise to me? When you durst do it, then you were a man; And, to be more than what you were, you would be so much more the man." Lady Macbeth's questions his manhood. This point proving if maybe more than any that Lady Macbeth's marriage to Macbeth is more equal than most. A typical woman in Elizabethan society to raise her voice to her husband, a soldier, a thane, and question his manly judgement, would not be permitted: "while it was smiling in my face, Have pluck'd my n****e from his boneless gums, And dash'd the brains out, had I so sworn as you Have done to this". Lady Macbeth continues insisting the strength of a man's word and that it cannot be broken. "We fail! But screw your courage to the sticking-place, And we'll not fail." Her wondrous dreams conclude that winning is all that matters; she wants and needs to be queen or die trying imploring him to commit himself to the act albeit treasonous. In Act 2 Scene 1, Macbeth's soliloquy revolves around imagining a dagger placed in front of him although knowing it is imaginary and just a fragment of his guilt stricken imagination: "Is this a dagger which I see before me" "Alarum'd by his sentinel, the wolf, Whose howl's his watch, thus with his stealthy pace." Shakespeare compares Macbeth to an animal of the night; he must follow out his deed with conviction to take charge of his pack. In the animal kingdom such an act would regularly occur and not be looked at twice as is natural to those. Macbeth must hunt like the wolf, the original dog, and deny his conscience in order to become the ultimate predator. At the end of the soliloquy, in scene 7 of the first act, are two separate rhyming couplets; Shakespeare's use of rhyming couplets is usually to depict the characters thoughts just before a major event: "Whiles I threat, he lives: Words to the heat of deeds too cold breath gives." ...read more.

lived most of his adult life but he is still not completely aware of his soon departure for the words of the three witches gave him false hope. "Bring me no more report" "Shall never sag with doubt nor shake with fear." Macbeth is in complete power; he has become the evil dictator his wife aspired him to yet she is not in the health to see it. "Bring it after me. I will not be afraid of death and bane, Till Birnam forest come to Dunsinane." This rhyming couplet represents Macbeth's loss of doubt; everything he feared before he has embraced and it has empowered him as a king to fight, not for his country, for himself and only himself. "Were I from Dunsinane away and clear, Profit again should hardly draw me here." The Doctor's self-sympathy in aside rhyming couplet is representative of all the servants and unlucky servers of the King who have been forced to loyalty under his emphatic regime. In Act 5 Scene 5 "I have almost forgot the taste of fears; The time has been, my senses would have cool'd To hear a night-shriek" This is Macbeth's admitting his change in character but know his life has been so corrupted by murders of the innocent. "She should have died hereafter; There would have been a time for such a word." When Lady Macbeth dies, Macbeth is almost emotionless as he soon discovers his confidence was unjust and his life will soon be over as well. "If this which he avouches does appear, There is nor flying hence nor tarrying here. I gin to be aweary of the sun, And wish the estate o' the world were now undone. Ring the alarum-bell! Blow, wind! come, wrack! At least we'll die with harness on our back." Macbeth is now prepared for immortality, he can take back his sins and treacheries for now he can only fight till death and die with the honour of a soldier albeit a corrupt one. ...read more.