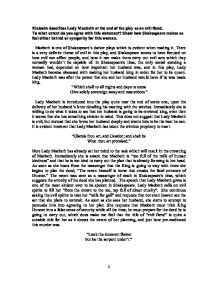 Is Lady MacBeth an Evil Fiend?

Malcolm describes Lady Macbeth at the end of the play as an evil fiend. To what extent do you agree with this statement? Show how Shakespeare makes us feel either hatred or sympathy for this woman. Macbeth is one of Shakespeare's darker plays which is evident when reading it. There is a very definite theme of evil in this play, and Shakespeare seems to have focused on how evil can affect people, and how it can make them carry out evil acts which they normally wouldn't be capable of. In Shakespeare's time, the only social standing a woman had, depended on how important her husband was, and in this play, Lady Macbeth became obsessed with making her husband king in order for her to be queen. Lady Macbeth was after the power that she and her husband would have if he was made king. "Which shall to all nights and days to come Give solely sovereign sway and masterdom." Lady Macbeth is introduced into the play quite near the end of scene one, upon the delivery of her husband's letter detailing his meeting with the witches. Immediately she is willing to do what it takes to see that her husband is going to be crowned king, even then it seems that she has something sinister in mind. This does not suggest that Lady Macbeth is evil, but instead that she loves her husband deeply and wants him to be the best he can. ...read more.

While her husband begins to talk nonsense, Lady Macbeth realises the effect the murder could have on them mentally and tells her husband "These deeds must not be thought After these ways so: it will make us mad." The ironic context of this statement shows us just how over confident she was of herself, as ultimately it was her who went mad, and it does make us feel some sympathy for her as she clearly misjudged the affect the murder would have on her. While her husband remains quite panicky, she is relatively calm and collected and it is she who realises that Macbeth forgot to incriminate the guards. Macbeth himself is unwilling to go back into Duncan's chamber so she decides to do this herself. When she comes back with b****y hands, she further insults her husband: "My hands are of your colour but I shame to wear a heart so white." Here also Lady Macbeth does fit the description of a "fiend like queen" as she shows no emotion whatsoever for the two servants who she has just framed of the murder, and she further insults her husband when it is evident he is feeling remorse for the crime he has just committed. She also is na�ve enough to say "A little water clears of this deed" When it is she who later remarks "All the perfumes of Arabia will not sweeten this little hand" after the memory of the murder has drove her close to insanity. ...read more.

hands Took her own life" After Macbeth has been killed, Malcolm refers to them as "the dead butcher and his fiend like queen." Personally I only partly agree with this statement, as I feel that the acts that Lady Macbeth committed were out of the love for her husband, and wanting what was best for him. I believe after she asked evil to take her she was no longer herself, until near the end of the play, and then she so overcome with guilt, not just with actions her husband had done of her behalf but also those he had done by himself, like the murder of the thane of Fife's wife and children. In the end she only wanted to be relieved from the guilt she felt so she took her own life. I don't think her actions credit her with the title of fiend-like queen as she did feel remorse for the atrocities committed, and by killing herself she tired to make up for it. The question that that Shakespeare makes us ask is had the witches not confronted Macbeth would he have been made king without the murder of Duncan? I personally think the answer to this would have been yes, and it that is the nature of evil, to want something so badly that you will do anything to get it, and it was the witches that created that want. ?? ?? ?? ?? 1 ...read more.