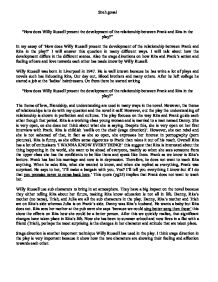 Despite this, she is very open on her first interview with Frank. Rita is childish 'swills on the chair (stage direction)'. However, she can rebel and she is not ashamed of that, in fact as she so open, she expresses her interest in pornography (porn pictures). Rita is funny, as she offers some cigarettes to Frank than takes it out of his reach. Overall Rita has a lot of enthusiasm 'I WANNA KNOW EVERYTHING!' this suggest that Rita is interested about the thing happening in the world, she want to be ahead of everyone, mainly so when she sees someone from the upper class she has the confidents to be like them and speak like them. ...read more.

Danny, Rita's mother and Trish are on Rita's side whereas Julia is on Frank's side. Danny was Rita's husband. He wants a baby but Rita does not. Rita sees her mother at the pub were she says 'because we could sing better song then those' this show the effects on Rita how she could be a better person. After this we quickly realise, that significant changes have taken place in Rita's life. Now she has been to summer school and now lives in a flat with a friend (Trish), perhaps the most surprising is the changes in her character and attitude that are taken place. Stage direction is another important technique Willy Russell has used in the play. I think stage direction in the play is very important because it show how the two characters are showing their feeling and affection towards each other. ...read more.