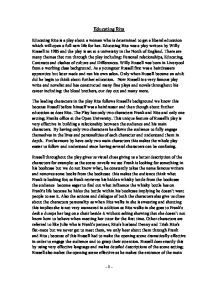 Educating Rita Educating Rita is a play about a woman who is determined to get a liberal education which will open a full new life for her. Educating Rita was a play written by Willy Russell in 1985 and the play is set at a university in the North of England. There are many themes that run through the play including: Personal relationships, Educating, Contrasts and clashes of culture and Differences. Willy Russell was born in Liverpool from a working class background. As a youngster Russell first was a hairdressers apprentice but later made and ran his own salon. Only when Russell became an adult did he begin to think about further education. Now Russell is a very famous play write and novelist and has constructed many fine plays and novels throughout his career including: the blood brothers, our day out and many more. The leading characters in the play Rita follows Russell's background we know this because Russell before himself was a hairdresser and then though about further education as does Rita. The Play has only two characters Frank and Rita and only one setting; Franks office at the Open University. This unique feature of Russell's play is very effective in building a relationship between the audience and his main characters. By having only two characters he allows the audience to fully engage themselves in the lives and personalities of each character and understand them in depth. Furthermore by have only two main characters this makes the whole play easier to follow and understand since having several characters can be confusing. Russell throughout the play gives us visual clues giving us a better description of the characters for example: as the scene unveils we see Frank is looking for something in his bookcase but we do not ...read more.

bag next to Frank's desk on a chair without asking this shows that Rita has not got the common decency to first introduce herself and wait till she is said to sit down. Also this shows that Rita does not know how to act in an formal interview situation as we would expect her to appear submissively and formally, may be shy but Rita does the complete opposite by being loud, cheeky and informal. Examples of this include: When she asks Frank if she can smoke inside his office and before Frank had a chance to answer she already took the cigarettes out in addition she asks Frank if he would like one as well trying to calm the situation and to relieve the tension. Rita is also confused in the way Frank speaks English in a formal way we learn this by when Frank asks Rita "You are?" then Rita replies "What am I? Due to the lack of formal English known by Rita she is unable to understand what Frank is trying to ask and still doesn't after Frank asks her twice. Rita isn't really sure how to act in the interview also her insecurity and anxiety makes her appear in such a loud and bold manner. The way Rita talks about the door handle incident shocks both the audience and frank this is because Frank tries to explain " ERM-Yes, I supposed I always mean to ..." as Frank is explaining to Rita, Rita again shows herself up as being, a ill-mannered as she doesn't let Frank finish his sentence and starts talking again ."Well that's no good always meanin' to, is it? Y' should get on with it; one of these days you'll be shoutin'' Come in' an' it'll go forever because the poor sod on the other side wont be able to get in. ...read more.

Do you know Yeats?" "The wine lodge?" "Yeats the poet" "No". Here we see the culture clash between Frank and Rita as Frank refers to the poet Yeats as he is an English Literature lecturer and therefore has read the poems and studied them and thinks of Rita to know a little about him. But Rita doesn't recognize Yeats the poet and shows of being of more of a lower class by asking if it's Yates the win lodge this shows us that Rita knows little or nothing about literature but knows about the popular wine lodge instead. By this misunderstanding between Frank and Rita there is a lot of humour caused as both are talking about to completely different things a poet and a wine lodge. Overall I think that the opening scene of the play is very effective and Willy Russell does a very good job of gaining the interest of the audience. Willy Russell gains the interest of the audience in many ways including using visual devices e.g. the Franks hidden whisky bottle in the bookcase implying the he discreetly drinks and may have drinking problems. Also we see Russell use dialogues and actions from the characters to increase the effect and to make the opening scene more dramatic examples of this include when Rita dumps her bag on the chair beside Franks desk from here we find out that Rita is a unmannered person also when Rita smokes in Franks office from here we also find out that she doesn't know how to act in a formal interview. Russell makes the scene dramatic as well as informing us about the characters and the themes of the play he does this by constantly using different devices and techniques for example visual actions and dialogue and different situations and topics of conversations also make the opening scene effective. ?? ?? ?? ?? - 1 - ...read more.