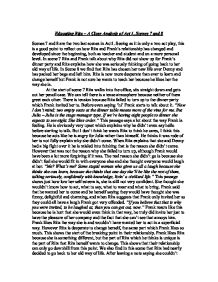 Educating Rita - A Close Analysis of Act 1, Scenes 7 and 8

Educating Rita - A Close Analysis of Act 1, Scenes 7 and 8 Scenes 7 and 8 are the two last scenes in Act1. Seeing as it is only a two act play, this is a good point to reflect on how Rita and Frank's relationship has changed and developed since the beginning, both as teacher and student and on a more personal level. In scene 7 Rita and Frank talk about why Rita did not show up for Frank's dinner party and Rita explains how she was seriously thinking of going back to her old way of life. In Scene 8 we find that Rita has chosen her new life over Denny and has packed her bags and left him. Rita is now more desperate than ever to learn and change herself but Frank is not sure he wants to teach her because he likes her the way she is. At the start of scene 7 Rita walks into the office, sits straight down and gets out her pencil case. We can tell there is a tense atmosphere because neither of them greet each other. ...read more.

This shows that their relationship can only go downhill from this point. We also find in this scene that Rita had nearly decided to go back to her old way of life. After leaving a note saying she couldn't make it at Frank's house she joined her old friends and family at the pub, they sing a few songs and have a few drinks, but Rita doesn't feel like she belongs there anymore. Rita then decides that she can lead a better life than that and decides to continue going to the university and is even more determined to change. At the start of scene 8 we find Frank occupied with Rita's Macbeth essay she enters the office and is about to start talking about the essay but then spots her suitcase. Rita then explains that she has been kicked out by Denny after being given an ultimatum; she was to choose between her new life and him. She chose her new life which shows just how much she really wanted to change. She was obviously upset but rather than wanting to discuss her problem she wanted to know more about her Macbeth essay. ...read more.

Frank is still pretty much the same cynical person as before but is rather disappointed because having finally found something new in his life he is going to have to lose it. Their relationship has also taken a drastic change at the start of the play they instantly clicked and got on well. They were very flirty with each other and asked loads of questions. After a few scenes the relationship had developed into a more friendly one, there was still flirting but they were mainly friends. They became very good friends and Rita tells Frank a lot about her life and she runs to him to discuss everything. Now towards the end of the first act Frank has realised that as much as he likes Rita, it is inevitable that she is going to change. He is obviously disappointed and tries to make Rita see that education isn't everything. Rita however is very determined to change her whole life; she makes many sacrifices to do so. Due to the change Rita is trying to make, she and Frank come into many different conflicts. Scenes 7 and 8 show us that Rita and Frank's relationship can only deteriorate from this point because the more determined Rita is to change the more bitter Frank will become. Lorraine Phillips 10H.1 (1494 words) ...read more.