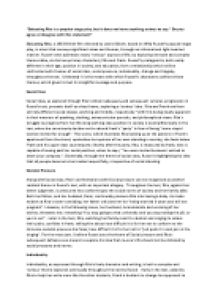 Educating Rita is a popular stage play, but it does not have anything serious to say. Do you agree or disagree?

﻿?Educating Rita is a popular stage play, but it does not have anything serious to say.? Do you agree or disagree with this statement? Educating Rita, a 1983 British film directed by Lewis Gilbert, based on Willy Russell's popular stage play, is a text that conveys significant ideas and themes, through an informal and light-hearted manner. Russel?s text addresses many ?serious? aspects of life, by exploring intricate and complex themes alike, via his two primary characters; Rita and Frank. Russell?s protagonists, both vastly different in their age, position in society, and education, form a relationship which will be confronted with themes of social class, social pressure, individuality, change and tragedy, throughout the text. Ultimately it is the means with which Russell?s characters confront these themes, which gives his text its insightful message and purpose. Social Class Social Class, as explored through Rita?s initial inadequacy and subsequent cultural- progression in Russel?s text, presents itself as a key theme, exploring a ?serious? idea. Rita and Frank are from entirely different social classes -working and middle, respectively ?with this being clearly apparent in their manners of speaking, clothing, extracurricular pursuits, and philosophical views. ...read more.

Both her father, and her husband, Demi, continually pressure Rita into having a baby. As made evident at Rita?s sister?s wedding, her father criticises her for ?being married 6 years and still not pregnant?. Likewise, in the following scene, her husband, inconsiderate and uncaring of her wishes, threatens her, remarking ?You stop going to that university and you stop taking the pill, or you?re out?. Later in the text, Rita, watching her family resort to alcohol and singing to solace their pains, confides in frank, telling him about how difficult it is for her not to conform to the immense societal pressure she faces; how difficult it is for her not to ?just pack it in and join in the singing?. For the most part, I believe Russel uses the theme of Social pressure and Rita?s subsequent defiance as a means to explore his idea that no-one?s life should not be dictated by social pressures and norms. Individuality Individuality, as expressed through Rita?s lively character and writing, is both a complex and ?serious? theme explored continually throughout the text by Russel. ...read more.

Frank, much like Shakespeare?s character of Macbeth, is ridden with flaws he cannot overcome. He is incapable of reform, and ultimately it is Frank?s tragic flaws; his apathy, his cynicism and his depression that make the loss of Julia, and his job by the end of the play, seem inevitable. However, these irony behind these tragedies is that they result in Frank embarking on a new endeavour; a new beginning in Australia where he will more than likely overcome his flaws. As such, tragedy, but more importantly how an individual overcomes it, presents itself as a key idea in Russel?s text. In conclusion, Willy Russell's stage play, Educating Rita, is a story with a lot of ?serious? things to say. Utilising the key characters in the plot - Rita, and Frank- Russell successfully conveys his solemn thoughts and ideas through themes of social class, social pressure, individuality, change and tragedy. Whilst perceived by many as a casual, unserious, light hearted play, Educating Rita can only be truly appreciated for its more serious themes after exploring the meaning behind its confronting themes and ideas. Word Count: 932 ...read more.