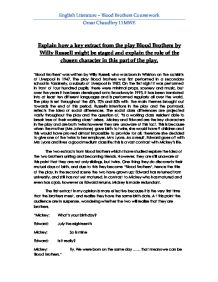 Explain how a key extract from the play Blood Brothers by w***y Russell might be staged and explain the role of the chosen character in this part of the play. "Blood Brothers" was written by w***y Russell, who was born in Whiston on the outskirts of Liverpool in 1947. The play Blood Brothers was first performed in a secondary school in Fazakerly, a suburb of Liverpool in 1982. On the first night it was performed in front of four hundred pupils, there were minimal props, scenery and music, but over the years it has been developed onto Broadway in 1993. It has been translated into at least ten different languages and is performed regularly all over the world. The play is set throughout the 60's, 70's and 80's with the main themes brought out towards the end of this period. Russell's intentions in the play and the portrayal, reflects the idea of social differences. The social class differences are projected vastly throughout the play and the question of, "Is a working class resident able to break free of their working class" arises. Mickey and Edward are the key characters in the play and are both twins however they are unaware of this fact. ...read more.

A part I admire of this scene is the part of the joke about the "Plate". The reality is a metal plate which is fixture by a doctor, however the boys interpret in a completely different way and they take it in the context of a dinner plate. "Mickey: It's 'cos he's got a plate in his head. Edward: A plate. In his head? Mickey: Yeh. When he was little, me mam was at work an' our Donna Marie was supposed to be looking after him but he fell out of the window an' broke his head. So they took him to hospital an' put a plate in his head. Edward: A plate. A dinner plate? Mickey: I don't think so, 'cos our Sammy's head's not really that big. It must have been one of those little plates that you have bread off. Edward: A side plate? Edward: No, it's on the top." This part of the scene, in particular, the quote will be acted out in a way that the audience can interpret from the brothers that the two are completely clueless on the type of plate. ...read more.

With his constant informal language and swears it shows to the audience Mickey's personality of how he does not burden on what others think of him. Russell presents the ideas of social class differences through numerous quotations in my chosen extract. The main social class differences are expressed through Edward and Mickey by means of comparison of the two. One way in which the social disparities are revealed through speech, as Edward is well spoken and formal, in contrast to Mickey who is informally spoken and uses abbreviated words vastly throughout his context. Another way that the differences are presented are through the behaviour and the way the two characters conduct themselves. Edward is straight forward in terms of personality, whilst Mickey is sly in the way he conducts his actions and his personality is quite difficult to understand. In my opinion Russell demonstrates the idea of human nature and society differences throughout the book effectively. My perception on Russell's main intention is that he is trying to illustrate the idea that, human nature does not affect the individual's actions, however society moulds the persons personality, due to the culture that the person is grown to be used to can change ones personality. ?? ?? ?? ?? English Literature - Blood Brothers Coursework Omar Chaudhry 11MWE ...read more.