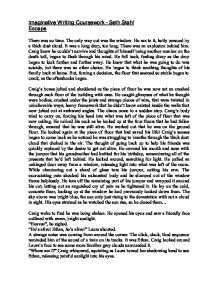 Escape There was no time. The only way out was the window. He ran to it, hotly persued by a thick dust cloud

Imaginative Writing Coursework - Seth Stahl Escape There was no time. The only way out was the window. He ran to it, hotly persued by a thick dust cloud. It was a long drop, too long. There was an explosion behind him. Craig knew he couldn't survive and thoughts of himself being another number on the death toll, began to flash through his mind. He fell back, feeling dizzy as the drop began to look further and further away. He knew that what he was going to do was suicide, but there was no other choice. He began to think soothing thoughts of his family back at home. But, forcing a decision, the floor that seemed so stable began to crack, as the aftershocks began. Craig's bones jolted and shuddered as the piece of floor he was now sat on crashed through each floor of the building with ease. He caught glimpses of what he thought were bodies, crushed under the joists and strange pieces of wire, that were twisted in unbelievable ways; heavy framework that he didn't know existed inside the walls that now jutted out at awkward angles. ...read more.

The excruciating pain shocked his exhausted body and he slumped out of the window frame helplessly. He tore off the remaining part of his jumper and wrapped it around his cut, letting out an anguished cry of pain as he tightened it. He lay on the cold, concrete floor, looking up at the window he had previously looked down from. The sky above was bright blue, the sun only just rising to the devastation with not a cloud in sight. His eyes strained as he watched the sun rise, so he closed them... Craig woke to find he was being shaken. He opened his eyes and saw a friendly face outlined with warm, bright sunlight. "Heaven", he sighed. "He's alive! Ethan, he's alive!" Laura shouted. A strange noise was coming from around the corner. The click, clack, thud sequence reminded him of the sound of a train on its tracks. It was Ethan. Craig looked around Laura's face to see some more familiar grey clouds surrounded it. "Where am I?" Craig whispered, squinting as Laura turned her shadowing head to see Ethan, releasing painful sunlight into his eyes. ...read more.

Craig was surprised as it seemed less dramatic as his 'escape' had been. Ethan was running towards them with a large rucksack on his back. It was bouncing up and down, making him look quite silly against his serious expression. "Here", he said, panting. He handed the first aid kit to Laura after attempting to open it. "What happened to your shoe, it's making a really funny noise you know" smiled Craig. "Never mind that, your arm's bleeding", exclaimed Ethan. Laura explained to Craig while bandaging his arm that Ethan had lost his shoe while escaping from the flat and had attempted to make a new one from plastic and bits of string. They laughed to themselves and Ethan soon joined in. They helped Craig up from the floor and began walking, not knowing where they were taking themselves. They walked past a local television rental store and noticed that one television screen wasn't smashed, but the screen was blank anyway. There was an awkward silence as they walked, as there was nothing left to talk about. Nothing but doubt, death and disaster which they tried not to think about. So they walked away quietly, avoiding pointless conversation. ?? ?? ?? ?? ...read more.