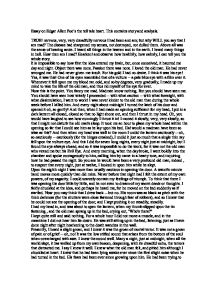 Essay on Edgar Allen Poe's the tell tale heart. This contains story and analysis. TRUE! nervous, very, very dreadfully nervous I had been and am; but why WILL you say that I am mad? The disease had sharpened my senses, not destroyed, not dulled them. Above all was the sense of hearing acute. I heard all things in the heaven and in the earth. I heard many things in h**l. How then am I mad? Hearken! and observe how healthily, how calmly, I can tell you the whole story. It is impossible to say how first the idea entered my brain, but, once conceived, it haunted me day and night. Object there was none. Passion there was none. I loved the old man. He had never wronged me. He had never given me insult. For his gold I had no desire. I think it was his eye! Yes, it was this! One of his eyes resembled that of a vulture -- a pale blue eye with a film over it. Whenever it fell upon me my blood ran cold, and so by degrees, very gradually, I made up my mind to take the life of the old man, and thus rid myself of the eye for ever. Now this is the point. ...read more.

So I opened it -- you cannot imagine how stealthily, stealthily -- until at length a single dim ray like the thread of the spider shot out from the crevice and fell upon the vulture eye. It was open, wide, wide open, and I grew furious as I gazed upon it. I saw it with perfect distinctness -- all a dull blue with a hideous veil over it that chilled the very marrow in my bones, but I could see nothing else of the old man's face or person, for I had directed the ray as if by instinct precisely upon the damned spot. And now have I not told you that what you mistake for madness is but over-acuteness of the senses? now, I say, there came to my ears a low, dull, quick sound, such as a watch makes when enveloped in cotton. I knew that sound well too. It was the beating of the old man's heart. It increased my fury as the beating of a drum stimulates the soldier into courage. But even yet I refrained and kept still. I scarcely breathed. I held the lantern motionless. I tried how steadily I could maintain the ray upon the eye. Meantime the hellish tattoo of the heart increased. ...read more.

Was it possible they heard not? Almighty God! -- no, no? They heard! -- they suspected! -- they KNEW! -- they were making a mockery of my horror! -- this I thought, and this I think. But anything was better than this agony! Anything was more tolerable than this derision! I could bear those hypocritical smiles no longer! I felt that I must scream or die! -- and now -- again -- hark! louder! louder! louder! LOUDER! -- "Villains!" I shrieked, "dissemble no more! I admit the deed! -- tear up the planks! -- here, here! -- it is the beating of his hideous heart!" Poe's story is a case of domestic violence that occurs as the result of an irrational fear. To the narrator that fear is represented by the old man's eye. Through the narrator, Poe describes this eye as being pale blue with a film over it, and resembling that of a vulture. Does the narrator have any reason to fear the old man or his eye? Is it this phobia that evokes the dark side, and eventually drives the narrator to madness? Or could Poe be referring to a belief whose origins could be traced back to Greece and Rome? The belief in the evil eye dates back to ancient times, and even today, is fairly common in India and the countries bordering the Mediterranean Sea. ...read more.