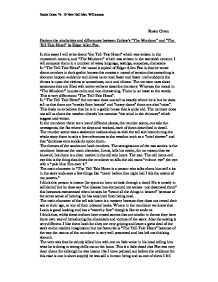 Rustie Orton Explore the similarities and differences between Collete's "The Murderer" and "The Tell-Tale Heart" by Edgar Allen Poe. In this essay I will write about "the Tell-Tale Heart" which was written in the nineteenth century, and "The Murderer" which was written in the twentieth century. I will compare them in a number of ways; language, settings, suspense, characters In "The Tell-Tale Heart" the mood is typical of Edgar Allen Poe in that he wrote about murders in dark gothic houses this creates a mood of tension that something is about to happen suddenly and drives us to read faster and faster until suddenly the climax is upon the victims or sometimes, on a anti-climax. The narrator uses short sentences that are filled with active verbs to describe the story. ...read more.

The themes of the stories are both murders. The strangest one of the two stories is the murderer because the main character, Louis, kills his victim, for no reason that we know of, but there is a clear motive in the tell tale heart. The eye. The old mans evil eye this is the thing that drives the murderer to kills the old mans "vulture eye" the eye with a "pale blue film over it." The main character in "The Tell Tale Heart is a person who talks about him self a lot in the story ands says a few things like "never before that night had I felt the extent of my powers." I think this person is insane (he spent an hour to look through a door) He is mostly in self-denial but he does say "the disease has sharpened my senses -not destroyed them" this becomes exenterated when ...read more.

The very way that he calmly killed him with out no little voice in his head telling him what he is doing is wrong chills me to the bone. This is a little detail that Poe was very clear about for although he was insane (As I have pointed out before the evidence for this case is not in short supply) he was still a human being and as one of them I fell disturbed that one human can do that to a fellow human. Humans are the most dangerous species because of our actions. Our kind is the only ones that ill because they feel like it. Not because they are hungry or in danger but because of pure spite. This is one of the many dangers of free will and Poe and collate point this out in the most disturbing ways imaginable. ?? ?? ?? ?? Rustie Orton Yr. 10 New Hall Mrs. Williamson ...read more.