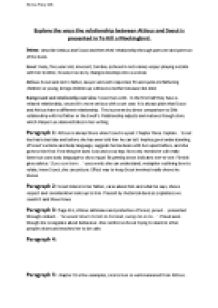 Essay Plan. Explore the ways the relationship between Atticus and Scout is presented in Part 1 of To Kill a Mockingbird.

﻿Emma Flory 10S Explore the ways the relationship between Atticus and Scout is presented in To Kill a Mockingbird. Intro: describe Atticus and Scout and then their relationship through part one and part two of the book. Scout: lively, five years old, innocent, tomboy (echoed in nick name) enjoys playing outside with her brother, however as story changes develops into a woman. Atticus: Scout and Jem?s father, lawyer and well respected, 50 and quite old fathering children so young, brings children up without a mother because she died. ...read more.

Chapter three. Explain? Scout has had a bad day and before she has even told him he can tell. Implies good understanding of Scout?s actions and body language, suggests he has been with her upset before, and she goes to him first. First thing he does is sit and cross legs. Not only reveals he will really listen but uses body language to show equal. By getting down indicates one-to-one. Finnish gives advice: ?if you can learn?? uses words she can understand, metaphor outlining how to relate, know Scout, she can picture. ...read more.

Paragraph 4: Paragraph 5: chapter 31 a few examples, nice to boo so well-mannered from Atticus? stands in boos shoes? hugs Atticus at end and he still knows how to look after her etc. Narrative structure dills flash backs, also symbolic for scouts good relationship with Atticus Internal structure Last paragraph polite to Boo even though didn?t know a lot about him. This is internal structure suspense reader wants to know what is going on. Presentation: Kisses and hugs Scout Language Finch idiolect when Atticus is talking to Scout Harper Lee?s ideas and perspective: In the eyes of the reader Atticus is a hero suggesting Harper Lee agrees with his views and ideas. ...read more.