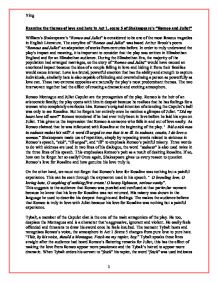 Examine the themes of love and hate in Act 1, scene 5 of Shakespeare's &quot;Romeo and Juliet&quot;

Examine the themes of love and hate in Act 1, scene 5 of Shakespeare's "Romeo and Juliet" William's Shakespeare's "Romeo and Juliet" is considered to be one of the most famous tragedies in English Literature. The storyline of "Romeo and Juliet" was based Arthur Brook's poem "Romeus and Juliet" an adaptation of works from centuries before. In order to truly understand the play's impact and meaning, it is important to consider that the play was written in Elizabethan England and for an Elizabethan audience. During the Elizabethan Era, the majority of the population had arranged marriages, so the story of "Romeo and Juliet" would have caused an emotional impact because the idea of a couple falling in love and hiding it from their families would cause interest. Love is a brutal, powerful emotion that has the ability and strength to capture individuals, similarly hate is also capable of blinding and overwhelming a person as powerfully as love can. These two extreme opposites are naturally the play's most predominant themes. The two interwoven together had the effect of creating a dramatic and exciting atmosphere. Romeo Montague and Juliet Capulet are the protagonists of the play. Romeo is the heir of an aristocratic family; the play opens with him in despair because he realises that he has feelings for a woman who completely overlooks him. ...read more.

Romeo later goes to the extremes to prove that his love for Juliet is genuine. Romeo epitomises love more than any other character in the play "Romeo and Juliet". Tybalt then goes on to insult Romeo by calling him a "slave" with an "antic face". Once again, Shakespeare made use of language to degrade the character of Tybalt, to create a contrast between the characteristics of him and Romeo. This contrast has the effect of emphasising the themes of love and hate in the play as they are extreme opposites, just like the characteristics of the two. This contrast also has the effect of making the character of Romeo become more likable to the audience compared to Tybalt's. "To fleer and scorn at our solemnity?" is an exaggeration, both "fleer" and "scorn" are words that are too strong to be used to describe this situation, those words should only be used when someone has truly done something extremely disrespectful and it is clear that Romeo has done nothing that serious to be accused of that. Tybalt is the character who epitomises hate more that any other character in the play, this was fully conveyed through the words "Now, by the stock and honour of my kin, To strike him dead, I hold it not a sin." ...read more.

Shakespeare chose to interlace the themes together to ask questions to the audience about what love actually is and not just how Romeo and Juliet act when they were on stage. The scene also deals with moral issues associated with the themes of love and hate. This scene presents to the audience, an immoral society where two families, Montagues and Capulets, despises each other so much that, they do not regard it as a sin to kill one another. Act 1, Scene 5 is the scene where Romeo and Juliet first meet and where Tybalt swears revenge on Romeo. From that point and onwards, it was clear that the themes of love and hate will always affect to one another. Romeo and Juliet both have love for each other and their families, but the hatred between the two families is what that causes the couple to hate those who oppose their relationship. Hate is present because the couple's illicit love is there to trigger it; therefore the two themes are always intertwined. As love is what that leads to the crucial hatred later on in the play. "My only love sprung from my only hate! Too early seen unknown, and known too late! Prodigious birth of love it is to me, That I must love a loathed enemy." ?? ?? ?? ?? Ying 1 ...read more.