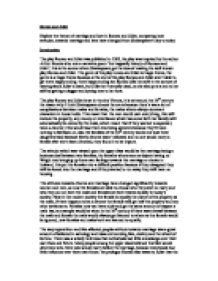 towards the marriage or choice in husband, this put the females into a difficult position because if they disagreed they will be forced into the marriage and if they wanted to run away they will have no housing . The attitudes towards divorce and marriage have changed significantly towards women and men, as now the females are able to choose who they wish to marry and who they do not; both the male and females are both treated equally in today's society. Now in the modern society the female is equally the owner of the property as the male, if there happens to be a divorce the female will get half the property and any other settlements. Females now can have a job and get the same amount of respect a male has, an example would be when in the 16th century if there was a brawl between the male and female the male would always get listened to where as the female would be ignored, now females and males both are listened to equally. ...read more.

A part where you can say it was fate that romeo and Juliet where meant to meet is that if Romeo and his mates never bumped into the servant they would have never known about the party and if they'd never gone to the party Romeo would not have fallen in love with Juliet. Main Prologue The thing that is revealed before the play is a bit about the play. This part is spoken by a single actor, who's commenting on the action, she's introducing us to Verona, talking about how the city is dived by an ancient curse, the actor doesn't tell us the cause of this brawl between the families, capulate's and montagues but says there's been a separation between both the familes. She also tells us right from the start that both the children of capulat and monatague would die, the quote where she says this is ,"from forth the fatal lions of these two foes a pair of star-cross'd lovers take there life; whose misadventur'd piteous overthrows doth with their death bury their parents' strife". ...read more.