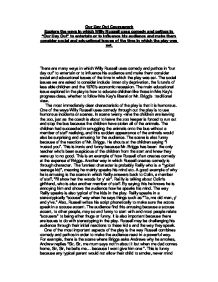 Explore the ways in which Willy Russell uses comedy and pathos in &quot;Our Day Out&quot; to entertain or to influence

One of the most important aspects of the play is the way Russell combines comedy and pathos in order to make the audience react in a powerful way. For example, there is the scene where Briggs asks Andrews why he smokes, Andrew replies "Sir, Sir, me mum says nott'n about it but when me dad comes home, Sir, Sir, he belts me... because I wont give him one". This is funny because any typical parent would not allow their child to smoke, never mind asking for one. However we are then made to analyse why we are laughing and afterwards, we may feel guilty because we think how we are brought up compared to him, knowing right from wrong. Therefore, Russell has made us consider the social issues through making us laugh. There are areas in the play where Russell appears to be using pathos deliberately in order to influence and affect the audience. When the children visit the zoo, they see a brown bear in a pit, Russell is actually using symbolism to explore contrasting opinions about the kids situations. "And don't forget it was born in captivity so it won't know any other sort of life", this is Mr. ...read more.

Mrs. Kay however clearly states that the children should be treated fairly and has little hope for their futures. When Mrs Kay speaks about how the kids are being brought up to be nothing more than "factory fodder", she could take her argument even further. Unemployment was so widespread in Liverpool in the 1970s, that the "progress" children had little prospects of any job at all. The fact that Carol is willing to stay in Wales at the end of the play, and even considers jumping off a cliff rather than returning, illustrates how hopeless her life and prospects are. The same for all the other children in Liverpool at that time. In my own opinion, I think that Willy Russell's main aim was to influence his audience by entertaining them. There are so many examples in the play were a funny incident is in fact more than it seems and makes the audience think. For example the best incident is were Brigs is talking to Andrews about smoking, Andrews says that his dad beats him up because he wont give him one. This is just one of many examples were by Russell uses what seems to be funny incidents but when thought about them more carefully, turns into pathos. ...read more.