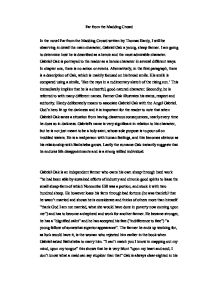 Far from the madding crowd

Far from the Madding Crowd In the novel Far from the Madding Crowd written by Thomas Hardy, I will be observing in detail the main character, Gabriel Oak a young, sheep farmer. I am going to determine how he is described as a heroic and the most admirable character. Gabriel Oak is portrayed to the reader as a heroic character in several different ways. In chapter one, there is no action or events. Alternatively, in the first paragraph, there is a description of Oak, which is mainly focused on his broad smile. His smile is compared using a simile, 'like the rays in a rudimentary sketch of the rising sun.' This immediately implies that he is a cheerful, good-natured character. Secondly, he is referred to with many different names. Farmer Oak illustrates his status, respect and authority. Hardy deliberately means to associate Gabriel Oak with the Angel Gabriel. God's hero lit up the darkness and it is important for the reader to note that when Gabriel Oak saves a situation from having disastrous consequences, nearly every time he does so in darkness. Gabriel's name is very significant in relation to his character, but he is not just meant to be a holy saint, whose sole purpose is to pour oil on troubled waters. He is a real person with human feelings, and this becomes obvious as his relationship with Bathsheba grows. Lastly the surname Oak instantly suggests that he endures life disappointments and is a strong willed individual. ...read more.

Why, if I'd wanted you I shouldn't have run after you like this; t'would have been the forwardest thing!" Bathsheba, however, is not the shallow woman that these two characteristics seem to suggest. After refusing Oak's proposal, Bathsheba inherits a farm and money. This occurrence would give Bathsheba more independence and freedom, so in that way she has changed from the start of the novel. She gradually develops through the novel as she becomes less vain, stubborn, insensitive, and egocentric and becomes more confident, caring and more determined to make her farm work, this shows how her character changes as she looks at the bad things that have happened in her life and tries to put them right. As she progresses through the novel her responsibilities become more demanding. When we first meet Bathsheba she is going to live with her aunt, and is probably dependant upon her. She is an independent and capable woman, as her determined management of her uncle's farm indicates. She is genuinely sorry when she realises the damage she has done by sending the valentine to Boldwood and is prepared to sacrifice herself to him in a marriage that, at best, would be founded on guilt and duty. Her marriage to Troy is another source of pain - she loves him "I felt powerless to withstand or deny him" and is betrayed by his callousness and self-confessed love for fanny. Hardy makes it clear that there is much to admire in Bathsheba and although her impulsiveness leads her to make two disastrous mistakes - the valentine and her marriage to Troy - she pays dearly for them both. ...read more.

Bathsheba notices the "three chevrons upon his sleeve," indicating that he is a sergeant. He has a moustache and is also described as "young and slim". Hardy states that Troy's "sudden appearance was to dark what a trumpet was to silence." This adds effect to Troy's portrayal as a flamboyant character. Troy most often appears in bright daylight - almost as if nature is reminding us that we are seeing an actor on a stage, performing a series of roles which he can assume and shed at will. Oak's is a humble man, modest in displaying his most obvious talents - his flute playing and his gifted handling of animals. As he is in his life, so he is in love. He is not masterful enough to press his case insistently with Bathsheba, as Boldwood does, but it is great virtue of constancy which eventually gains him the prize of her hand in marriage. His absolute honesty causes him to speak his mind too readily - he does not always have the same sure touch with people (especially Bathsheba) as he his demonstrates with animals. He is unable to summon any degree of tact in dealing with Troy but this further endears him to the reader - as he does his gentle generosity with distracted Boldwood. Hardy develops Oak's character as the novel progresses - he learns to deal with Bathsheba more sympathetically and offers freely to help which only he is able to give. After his experiences in the novel he has become sympathetic man and the perfect husband for Bathsheba in a marriage based on their friendship and loyalty. ...read more.