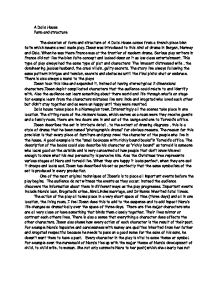 A Dolls House Form and structure The skeleton of form and structure of A Dolls House comes from a french piece bien faite which means a well made play. Ibsen was introduced to this kind of drama in Bergen, Norway and Oslo. When he was there France was at the frontier of modern drama. Serious play writers in France did not like the bien faite concept and looked down on it as low class entertainment. This type of play always had the same type of plot and characters: The innocent distressed wife , the domineering jealous husband, the cruel villain, guilty secrets. The story line always following the same pattern intrigue and tension, secrets and obstacles until the final pistol shot or embrace. There is also always a moral to the plays Ibsen took this idea and expanded it, instead of having stereotypical 2 dimensional characters Ibsen depict complicated characters that the audience could relate to and identify with. Also the audience can learn something about there world and life through what's on stage for example learn from the characters mistakes like mrs linde and krogstad who loved each other but didn't stay together and so were un happy until they were reunited. ...read more.

When they are happy it looks perfect, when they are sad it droops and looks sad. Ibsen has described his set so perfectly that the same symbolism of the set is produced in every production. One of the most original techniques of Ibsen's is to place all important events before the play begins. The audience do not witness the events as they occur; instead the audience discovers the information about them in different ways as the play progresses. Important events include Nora's loan, Krogstad's crime, Mrs Lindes marriage, and Dr Ranks inherited fatal illness. The action of the play all takes place in a very short space of time (three days) and all in one location, the living room. I feel Ibsen does this to add to the suspense and to add impact Nora's life changes so dramatically over the space of three days. There are five major characters who are all very close or have something that binds them closely together. Their lives mirror or contrast each others lives. There is also a sense that everything a character does affects the other characters. ...read more.

The details revel hidden meanings of the play In the same way that the action is constructed to make the audience feel the tension mounting. In act one is calm everyday life but by they end shows disturbing revelations and problems. In Act 2 thoughts of ranks death and suicide climax in Nora's frantic tarantella. By the third and final act the audience feels the tension and Nerves that Nora feels as they no everything that she does and that Torvald is about to find the letter. Until when Helmer finds out, there is a sense of relief until he decides he will not support Nora. The Climax of the play is not what the audience suspected. The audience suspected it would be when Torvald finds out, however the true climax of the play is when Nora slams the door. Another technique Ibsen uses to show the end of a scene with the door bell or the nurse coming in and asking for someone for example at the end of act one when the nurse comes in and asks for Nora's help with the children. ...read more.