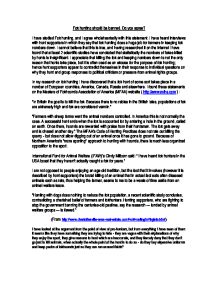 Fox hunting should be banned. Do you agree?

Fox hunting should be banned. Do you agree? I have studied Fox hunting, and I agree wholeheartedly with this statement. I have heard interviews with hunt supporters in which they say that fox hunting does a huge job for farmers in keeping fox numbers down. I cannot believe that this is true, and having researched it on the internet I have found that at least 2 scientific studies have concluded that statistically the numbers of foxes killed by hunts is insignificant. I appreciate that killing the fox and keeping numbers down is not the only reason that hunts take place, but it is often used as an excuse for the purpose of fox hunting; hence hunt supporters appear to contradict themselves in their response to individual questions on why they hunt and group responses to political criticism or pressure from animal rights groups. ...read more.

The fox gets away and is chased another day." The MFAA's Code of Hunting Practices does not rule out killing the quarry - but does not allow digging out of an animal once it has gone to ground. Because of Northern America's "more sporting" approach to hunting with hounds, there is much less organized opposition to the sport. International Fund for Animal Welfare (IFAW)'s Cindy Milburn said: "I have heard fox hunters in the USA boast that they haven't actually caught a fox for years." I am not opposed to people enjoying an age-old tradition, but the fact that it involves (however it is described by hunt supporters) the brutal killing of an animal that in actual fact eats often diseased animals such as rats, thus helping the farmer, seems to me to be a waste of time aside from an animal welfare issue. ...read more.

Religion, be it Christianity or Islam or a large number of others, takes a stance on animal rights, however there are divisions within these religions and so it is hard to determine the exact position the religion takes on the issue. The following are quotes or general attitudes from various Christian sources: "God has created a 'good' world. Therefore, we should leave it as it is, and not take animals out of their natural environment or treat them badly." "God is father and we are his children... Animals are part of God's family." - Simon Phipps, former Bishop of London "It is no sin to beat a dog to death" - The Archbishop of Udine, Italy "Blessed are the meek" - Jesus These quotes show pretty much a full spectrum of Christian views on animal rights. To me it suggests that in a matter like hunting you cannot rely on religion for guidance on the issue. ...read more.

This is a Writing to Argue task and the candidate responds very well and confidently to the task set. The candidate shows an ability to use a number of techniques required for a effective argument and uses the majority of ...

This is a Writing to Argue task and the candidate responds very well and confidently to the task set. The candidate shows an ability to use a number of techniques required for a effective argument and uses the majority of them well. I would argue that possibly the quotes form "pro-hunters" and Christian members should be integrated into a paragraph format and not left to stand alone in a form of list though, as it does seem quite odd that a cohesive argument would break mid-sentence for the sake of a few words that could easily be placed in normal writing format. One thing that prevents this answer from achieving what could be the candidate's potential is the lack of conclusion. There appears to be some sort of conclusion being attempted, but it does not draw on enough of the evidence explored an analysed in the above paragraphs to properly suffice. It also appears to be closing the analysis of the penultimate paragraph and, as conclusions are not supposed to introduce any new ideas, this needs to be rectified if the candidate wishes to reach the highest mark band.

The Level of Argument is very good, with the candidate employing a number of required literary devices in order to shape a good argument against fox hunting. The candidate uses Second Person address, abundances of rhetoric and draws on a number of professional sources. They also consider a counter-argument. In fact, they do this is the first paragraph and immediately shoot the argument down by showing how the external, independent research they have carried out (examiners love to see this) can prove wrong such argument for fox hunting.

The Quality of Written Communication is above average. There is a good handling of the English language and the candidate has adhered well to the required standards of written expression.