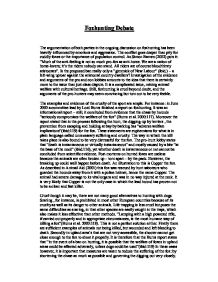 Foxhunting Debate -The argumentation of both parties in the ongoing discussion on foxhunting has been heavily influenced by emotions and aggression.

Foxhunting Debate The argumentation of both parties in the ongoing discussion on foxhunting has been heavily influenced by emotions and aggression. The conflict goes deeper than pity for cuddly foxes or the importance of population control. As Simon Barnes (2002) puts it: "Much of the anti-feeling is not so much pro-fox as anti-horse. We are a nation of horse-lovers; it's the riders nobody can stand. All riders are of course bloodthirsty aristocrats". Is the proposed ban really only a "gimmick of New Labour" (ibid.) - a left-wing uproar against the aristocrat country dwellers? Investigation of the evidence and arguments of the pro and con lobbies amounts to the idea that there is certainly more to the issue than just class dispute. It is a complicated issue, mixing animal welfare with cultural heritage. Still, foxhunting is cruel beyond doubt, and the arguments of the pro-hunters may seem convincing but turn out to be very feeble. The examples and evidence of the cruelty of the sport are ample. For instance: in June 2000 a committee lead by Lord Burns finished a report on foxhunting. It was an informational report - still, it concluded from evidence that the chase by hounds "seriously compromises the welfare of the fox" (Burns et al. ...read more.

Secondly in upland area's that are not very accessible, the shooter cannot get close enough to the fox to shoot it properly. It is therefore that the Burns report states that "in the event of a ban on hunting, it is possible that the welfare of foxes in upland areas could be affected adversely, unless dogs could be used"(ibid:119) In these cases however, it is important that measures are taken to reduce the suffering of the fox: by shortening the chase as much as possible and governing the digging out very closely. Foxes are seen as a threat to the countryside. Thanks largely to the pro-hunt lobby and the farmers' feud against the animals, many people assume that foxhunting or a replacement of it as a means of fox population control is a necessity. Animal Aid (2001) nonetheless, argues that "the foxes diet of rabbits and rats actually makes it an asset to most farmers". It also reputes the fox as a danger to flocks: "Only 0.4 per cent of lambs who die do so due to accidents, dog attacks, and all other animal predatation which includes being taken by foxes"(ibid). Some control over the population of foxes is needed to prevent it from growing to pestilent forms, but the role of hunting in this is largely overestimated. ...read more.

These statistics point out something in addition: parliament and the majority of voters might support a ban, but there is a small minority that does not. These people are putting up a vigorous fight. For the past few years they have been successful in at least delaying the ban. This part of the argument is indeed influenced by class differences: the aristocrat horsemen and their lobby might be a minority, but they are influential up to the highest ranks - the House of Lords, the financial world, and so forth. Behind the incoherent argument on animal welfare and pest control, other driving forces are at work. The discussion on the outside of the issue is hardly of any influence anymore: the voters and the government have made up their mind. In the meanwhile there are more pressing matters to be discussed that are perhaps more within the reach of animal activists. "There is more cruelty in ten minutes in a battery farm - debeaking machine and all - than in an entire day of ...hunting. But chickens - well, it's not a terribly sexy target is it?" as Barnes (2002) puts it. Eventually the government will break the defence and push a ban through, with or without the support of the Peers. Until then the power of the aristocrat hunters will remain a more important factor than all the other arguments in the debate. ...read more.