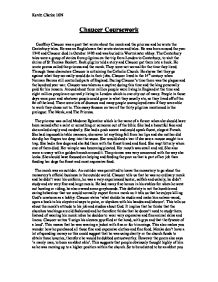 Geoffrey Chaucer was a poet that wrote about the monk and the prioress and he wrote the Canterbury tales. He was an Englishman that wrote stories and tales. He was born around the year 1340

Chaucer Coursework Geoffrey Chaucer was a poet that wrote about the monk and the prioress and he wrote the Canterbury tales. He was an Englishman that wrote stories and tales. He was born around the year 1340 and Chaucer died in October 1400 and was buried in Westminster abbey. The Canterbury tales were a group of stories from pilgrims on the trip from London to Canterbury, to visit the shrine of St Thomas Beckett. Each pilgrim told a story and Chaucer put them into a book. He wrote poems called the prioress and the monk. They were not normal for the time they lived. Through these characters Chaucer is criticizing the Catholic Church. He shows that they go against what they normally would do in their jobs. Chaucer lived in the 14th century when Norman Barons still controlled parts of England. During Chaucer's time there was the plague and the hundred year war. ...read more.

She should have focused on helping and feeding the poor as that is part of her job than feeding her dogs the finest and most expensive food. The monk was an outrider. An outrider was permitted to leave the monastery to go about the monastery's official business in the outside world. Chaucer tells us that he was no ordinary monk and he didn't wear his uniform, he was a very experienced hunter, selfish and unholy, he didn't study and ate very fine and large meals. He had many fine horses in his stables for when he went out hunting or riding, he also owned some greyhounds. This definitely is not the humble and caring behaviour that we would normally expect from a monk as it tells us that he enjoys killing God's creatures as a hobby. Chaucer states 'what sholde he studie and make him selven-wood, upon a book in his cloystre always to paire, or shynken with his handes and.laboure'. ...read more.

They both seem unsure of where their priorities lie for example the monk doesn't study and his hobby is hunting. The prioress feeds her dogs with the finest bread and seems to care more for animals than for humans. The monk is more blatant about the way he feels about the church and his disregard for the rules of the Catholic Church. What Chaucer is saying through the view of these two abnormal followers of God is that the church don't focus on the people that volunteer to help others otherwise these two characters would probably not be allowed to follow God under the church. The monk and prioress should be unselfish people caring for everyone in need and helping them in any way possible and should not have any doubts about God and should study hard and follow the church's principles strictly! But they don't they worry more about animals and their leisure time also they are concerned about how they look and what they eat. ?? ?? ?? ?? Kevin Clarke 10N ...read more.