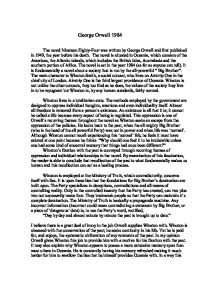 George Orwell 1984 The novel Nineteen Eighty-Four was written by George Orwell and first published in 1949, the year before his death. The novel is situated in Oceania, which consists of the Americas, the Atlantic islands, which includes the British Isles, Australasia and the southern portion of Africa. The novel is set in the year 1984 (as far as anyone can tell). It is fundamentally a novel about a society that is run by the all-powerful " Big Brother". The main character is Winston Smith, a social outcast, who lives on Airstrip One in the chief city of London. Airstrip One is the third largest providence of Oceania. Winston is not unlike the other outcasts, they too find as he does, the values of the society they live in to be repugnant but Winston is, by any human standards, fairly normal. Winston lives in a totalitarian state. The methods employed by the government are designed to oppress individual thoughts, emotions and even individuality itself. Almost all freedom is removed from a person's existence. An existence is all that it is; it cannot be called a life because every aspect of being is regulated. This oppression is one of Orwell's recurring themes throughout the novel as Winston seeks an escape from the oppression of the policies. He looks back to the past, when the all mighty Big Brother (who is the head of the all powerful Party) ...read more.

It allows him to make a history that will be accurate, unlike the ones he encounters on a daily basis. It connects him with how he lives now, with how he used to live. It lets him prove, if only to himself, that the facts and figures churned out by the Party are nonsense, and that he is not crazy. Even the diary itself is associated with the past. The cream paper and real ink pen add to the nostalgic feel of the diary, and this attracts Winston to it. "Its smooth, creamy paper, a little yellowed by age, was of a kind that had not been manufactured for at least forty years past." The diary is a relic, a memento of the past, it provides a view into how people previously lived and thought. Without a view into the real past people have nothing to compare the present day with. Being able to think back and dwell on past experiences is what makes us who we are. Orwell uses clever symbolism to convey the fragile and complicated relationship between Winston and Julia. Orwell harnesses this relationship to emphasize the themes of oppression and healing and to show how the past can act as a healing process. Winston seeks out any relics of the past he can. He is especially fascinated with a fragile piece of coral embedded within a lump of glass, flat on one side with a convex surface on the other. ...read more.

"The proles had stayed human." It is in this scene that the full effect of the Party's atrocities hits Winston. He realises that the Party has not merely suppressed him; he has in effect been killed. Nothing he does, thinks, or says has any relevance any more. "When once you were in the grip of the party, what you felt or did not feel, what you did or refrained from doing, made literally no difference. Whatever happened you vanished, and neither you or your actions were ever heard of again." . The past does not just rejuvenate Winston's mental well-being, it also has effects on his physical health. A leg ulcer has troubled Winston, but when his memories are unlocked, through love, he notices that it almost completely recedes. The leg ulcer is perhaps used by Orwell to physically prove to the reader the points he has made about the past, that it is ultimately a healing process. Throughout the novel, Winston's 'quest' is to discover himself and become a human being. He looks back to past experiences and feelings as a way of becoming human, something most members of his culture are not. He is classed as unorthodox in a society where he is one of the very few rational people. I feel that in his fascination with the past Orwell shows that without the past we would not be the people we are and that by recollection of previous experiences we heal present ailments. ...read more.