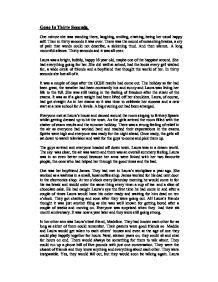 Gone In Thirty Seconds. One minute she was standing there, laughing, smiling, chatting, being her usual happy self. Then in thirty seconds it was over. There was the sound of screeching brakes, a cry of pain that words could not describe, a sickening thud. And then silence. A long mournful silence. Thirty seconds and it was all over. Laura was a bright, bubbly, happy 16 year old, maybe one of the happiest around. She had everything going for her. She did well at school, had the looks every girl wished for, a wide circle of friends and a boyfriend that thought the world of her. In thirty seconds she lost all of it. It was a couple of days after the GCSE results had come out. The holiday so far had been great, the weather had been constantly hot and sunny and Laura was living her life to the full. She was still taking in the feeling of freedom after the strain of the exams. It was as if a giant weight had been lifted off her shoulders. Laura, of course, had got straight As in her exams so it was time to celebrate her success and a new start at a new school for A levels. ...read more.

Their parents were good friends so Maddie and Laura would get taken to each others' houses and even at the age of one they could play happily together for hours. Now, sixteen years on, they could sit and chat for hours on end. There would always be something for them to talk about. They could run up a phone bill of five pounds with just one conversation. They were the closest of friends and they knew anything and everything about each other. They were inseparable. Yes, they would fall out, but they would soon be talking again. Laura could easily say she loved Maddie like her own sister, she loved her more than anything in the world. She would give her life for Maddie and Maddie would do the same for her. The evening passed by like a flash. The group moved around every club in town. Laura and Maddie danced the night away like nothing else mattered. At three o'clock in the morning when the last club closed Laura and Maddie said good bye to their friends and headed off into the night. They decided to take the short cut through the woods back to Maddie's house. They set off down the small road which wound through the woods, holding hands so not to lose each other in the darkness. ...read more.

Laura put up a protective barrier around herself keeping her from the world and the people in it. She wouldn't make conversation with people let alone let them get close to her. It was almost as if it was Laura who had been hit by the car that night. She had lost all the life in her body when Maddie died. However, a year after Maddie's death Laura started to come out of her shell slightly. She became friends with a group of people she knew from her school. She also started to get back into contact with her old friends. Nevertheless, there is one person that she can't forgive and that's Maddie. She can't forgive Maddie for loving her so much. Laura knew Maddie gave her life for her. She knew Maddie had put herself in front of that car to save Laura. Laura had heard the screeching of breaks and had seen the car headlights lighting up the woods around them. She had also felt herself being grabbed and thrown across to the side of the road by Maddie. Maddie had not had time to move out of the way. Laura also can't forgive herself for not having had fast enough reactions to pull Maddie out the way of the speeding car. When asked about it Laura just simply says, 'it could have been me lying there dead....... it should have been me'. ...read more.