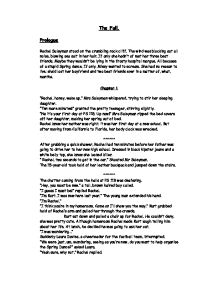 The Fall. Prologue Rachel Suleyman stood on the crumbling rock cliff. The wind was blocking out all noise, blowing sea salt in her hair. If only she hadn't of met her three best friends. Maybe they wouldn't be lying in the frosty hospital morgue. All because of a stupid Spring dance. If only. Missy wanted to scream. She had no reason to live; she'd lost her boyfriend and two best friends ever in a matter of, what, months. Chapter 1 "Rachel, honey, wake up," Mrs Suleyman whispered, trying to stir her sleeping daughter. "Ten more minutes!" grunted the pretty teenager, stirring slightly. "No it's your first day at PS 118. Up now!" Mrs Suleyman ripped the bed covers off her daughter, making her spring out of bed. Rachel knew her mother was right; it was her first day at a new school. But after moving from California to Florida, her body clock was wrecked. ****** After grabbing a quick shower, Rachel had ten minutes before her father was going to drive her to her new high school. Dressed in black hipster jeans and a white belly top, she knew she looked killer. " Rachel, two seconds to get in the car." Shouted Mr Suleyman. The 15-year-old took hold of her leather backpack and jumped down the stairs. ****** The chatter coming from the halls at PS 118 was deafening. ...read more.

She fell into Rachel's arms "Did you see who was it was? What kind of car? Anything?" asked Rachel. "A-All I know is the first part of the registration number; AP31." said Ally. As Rachel hugged Ally she felt a wet patch on the back of Ally's head. Blood! Rachel knew this was serious; this could lead to brain damage or something even worse! "Ally, we've got to get you to the hospital" said Rachel starting to panic. "No, I'll be ok in a mo, when I've had some sleep." "You can't" yelled Rachel "Get in my room and I'll call an ambulance" Ally went upstairs while Rachel went and phoned the ambulance. She walked into Rachel's room and lay down on the red bedspread. As Ally Barber drifted off she thought 'I must remember to tell Rachel the car was red'. Rachel walked into the room. "Nooooo, Ally, wake up!" But Ally wouldn't stir. ******* The funeral was really emotional, especially for Rachel. Although Kurt, Paul and Paige were there to comfort her Rachel felt guilty. If she could turn back time she could have stopped Kirsty going home, Kim of going to the mall and of told Ally to say at home! ******* 2 days later Paul was walking home from soccer practice, when he remembered he had leant Laura his watch. ...read more.

"You did murder my friends, didn't you?" screamed Rachel. "Yes I did. You turned up and everyone thought you were great. I used to be like that. Then you saw Tom and me kissing. I know you told Kirsty. For throwing me off the cheer squad she needed punishing. You were all working on the dance, except me. I was an outcast." Explained Laura. She began to cry. "You don't know how hard it is to be treated like that. I tried to get to you by killing your friends. I got messed up when Paul topped himself. I had to use the poison somehow, so I used it on Aimee. I didn't intend Kurt to get hurt." The sweet chime of Laura's doorbell interrupted Rachel's confrontation. Laura opened the door slowly. "Detective Inspector Marks. We are taking you under arrest for suspicion of murder. You do not have t..." As the police officer continued his speech, Rachel slipped out the back door. Epilogue Of all the things to happen, of all the people this had to happen to, it was me thought Rachel. Standing on the edge of Widow's Peak, the young, popular teenager was prepared to jump to her death. It was then she saw a vision. It was Kurt. Seeing him again, Rachel knew she couldn't jump. She'd be losing her life unnecessarily. My friends really were larger than life. I'll never forget them, thought Rachel. With that as her final thought Rachel Suleyman turned on her heel and began her descent down the steep hill. The End ...read more.