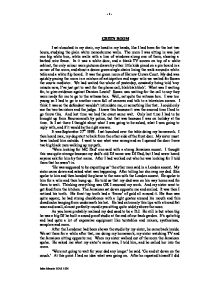 GREEN ROOM I sat slouched in my chair, my head in my hands, like I had been for the last two hours, studying the plain white monochrome walls. The room I was sitting in was just one big white box, white walls with a line of windows along one of them, showing a barbed wire fence. In it was a white door, and a blank TV screen on top of a white cabinet, the only colour were pictures drawn by other little kids pined on a pin board in a corner of the room, and about a dozen green single chairs lining the walls around a white table and a white flip board. It was the green room of Harrow Crown Court. My dad was quickly pacing the room in a mixture of anticipation and anger wile we waited for Suzan the courts mediator. We had waited the whole of yesterday, constantly being told 'any minute now, I've just got to wait for the phone call, blah blah blah'. What was I waiting for, to give evidence against Damian Lewis? Suzan was waiting for the call to say they were ready for me to go to the witness box. Well, not quite the witness box. I was too young so I had to go to another room full of cameras and talk to a television screen. I think it was so the defendant wouldn't intimidate me, or something like that. I could only see the two barristers and the judge. I knew this because it was the second time I had to go threw this. And last time we had the exact same wait. ...read more.

The Jamaican went to fetch some scissors and after returning told us that he was just going to leave them there so we could cut ourselves loose. I looked at Carleen and she looked back but we didn't say anything to each other. Then they left. It was now August 13th 2001; I was slouched in the back of detective Dave Reed's red Mondeo on my way back from Bournemouth next to my friend. We were told we had to come back to go to the trial, apparently we had to be there on that day and there was no way we couldn't be there. Three hours later we arrived at my house, my dad was waiting for us at the door to greet us. He was looking exceptionally smart today, much smarter than he normally was, he had black trousers a shirt and for the first time I had ever seen him, he was wearing a tie. We went out to greet him and then quickly got changed and straight away we were on the road towards Harrow, this time with my sister as well. No one had told me what was going to happen but it was the only question that was going through my head. Then it came, Harrow Crown Court, a big grey block, frosted letters across the front glass doors at the end of steep black steps. I walked up the tall clear doors and pulled them open. After the doors there was another barrier. Two uniformed guards and a metal detector stood in my way. Once past them I entered the lobby, this was breathtaking, it was like I had stepped into the Tardis, it didn't look too big from out side but once I had stepped in it was massive. ...read more.

'And what did you do when you saw them?' 'I went home to tell my parents and then they called the police' 'And did anything amount to this?' 'No' 'Were these people violent in any way towards you or your sister?' 'Not really' I replied to this next set of questions. 'Were you at all scared when this happened?' 'Of course I was a bit' This continued for about 5 minutes, little questions that I didn't really think mattered but I persisted in answering them. Then the prosecution barrister spoke. 'Jake, how old are you?' he said. '14' 'And how old were you when this happened?' '12' 'I have no further questions your honour'. I sighed a breath of air in relief, it was over, well my part was. I could return home and just wait for the verdict. Exactly one week later Dave Reid called at our door. He had it. We had been waiting for bad news from the result of the last trial. It was only me at the house because my dad had quickly gone out to the shops. Dave had decided to wait until he arrived. I made him a cup of tea and then we sat there for ten minutes until finally my dad arrived. When he heard that Dave was here from me he came in and sat down silently, which was highly unusual for him. Dave opened his mouth and out came two words, 'seven years'. My dad instantly jumped up in the air with a whoop of delight and I just sunk back into the depths of my chair. 'There's more good news' Dave continued, 'the Judge decided to grant both Jake and Carleen �250 each'. This was the icing on the cake. End Based on my true story. - 1 - Jake Mennie 10A1 10N ...read more.