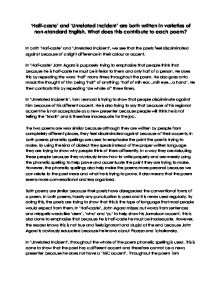 'Half-caste' and 'Unrelated Incident' are both written in varieties of non-standard English - What does this contribute to each poem?

'Half-caste' and 'Unrelated Incident' are both written in varieties of non-standard English. What does this contribute to each poem? In both 'Half-caste' and 'Unrelated Incident', we see that the poets feel discriminated against because of a slight difference in their colour or accent. In 'Half-caste' John Agard is purposely trying to emphasize that people think that because he is half-caste he must be inferior to them and only half of a person. He does this by repeating the word 'half' many times throughout the poem. He also goes onto mock the thought of him being 'half' of anything: 'half of mih ear...mih eye...a hand'. He then contrasts this by repeating 'de whole of' three times. In 'Unrelated Incidents', Tom Leonard is trying to show that people discriminate against him because of his different accent. He is also trying to say that because of his regional accent he is not acceptable as a new presenter because people will think he is not telling the 'trooth' and is therefore inadequate for the job. ...read more.

In 'Half-caste', John Agard misses out words from sentences and misspells words like 'dem', 'wha' and 'yu' to help show his Jamaican accent. This is also done to emphasize that because he is half-caste he must be inadequate. However, the reader knows this is not true and feels ignorant and stupid at the end because John Agard is obviously educated because he knows about Picasso and Tchaikovsky. In 'Unrelated Incident', throughout the whole of the poem phonetic spelling is used. This is done to show that the poet has a different accent and therefore cannot be a news presenter because he does not have a 'BBC accent'. Throughout the poem Tom Leonard repeats the word 'troo'/'trooth' five times just to emphasize the purpose of the poem, that he cannot tell the 'trooth' because of his different accent. By using a phonetic spelling, Leonard is ensuring that people assume that he is aggressive and immediately jump to conclusions that he must be because of his Glaswegian accent. ...read more.

By using words that the reader is unlikely to understand, the poets are making the reader feel ignorant and inadequate themselves. In 'Half-caste' John Agard uses the phrase 'de sun pass ah rass', which the reader will not understand meaning they will feel dense. Tom Leonard also does this in 'Unrelated Incidents by using phrases like 'belt up' and 'wanna yoo scruff'. This is confusing to the reader because although they will get the general idea of what the poet is trying to say, they will not understand it exactly. We can tell that both poets are using their non-standard English merely as a technique, rather than an inadequacy. This is because although the poems are not written in standard-English, the phonetical spelling is still comprehensible showing that as opposed to the reader's opinion they are still clever and equal to people who are of single race and who have a 'BBC accent'. In both poems, the use of non-standard English adds a lot to the purpose of the poems and helps accentuate the point the poet is trying to make. ...read more.

*** 3 stars
This is a good essay in many ways. It is logically structured and compares the two poems well.
In places quotes are used to further support the statements.
This is a very well written essay and the points are discussed with clarity.
At times the same words are repeated too often and the essay itself loses marks because points are also
repeated.