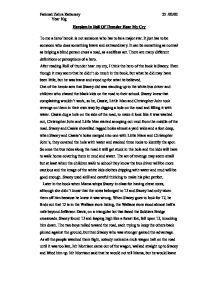 Heroism in Roll Of Thunder Hear My Cry.

Heroism in Roll Of Thunder Hear My Cry To me a hero/ heroin is not someone who has to be a major star. It just has to be someone who does something brave and extraordinary. It can be something as normal as helping a blind person cross a road, as a selfless act. There are many different definitions or perceptions of a hero. After reading Roll of thunder hear my cry, I think the hero of the book is Stacey. Even though it may seem that he didn't do much in the book, but what he did may have been little, but he was brave and stood up for what he believed. One of the heroic acts that Stacey did was standing up to the white bus driver and children who chased the black kids on the road to their school. Stacey knew that complaining wouldn't work, so he, Cassie, Little Man and Christopher John took revenge on them in their own way by digging a hole on the road and filling it with water. ...read more.

As all the people watched them fight, nobody noticed a mule wagon halt on the road until it was too late, Mr Morrison came out of the wagon, walked straight up to Stacey and lifted him up. Mr Morrison said that he would not tell Mama, but he would leave it up to Stacey to tell. Even though Stacey knew the trouble he would get into for going to the Wallace store against his parents wishes, he took the risk and told them. What he did showed that TJ was brave and risked the trouble he would get into, to show TJ a lesson. In the book Stacey is twelve years old, which is a manly age, where he has to be more responsible and understanding. Although there isn't much age difference between him and Cassie, Stacey is very understanding and knows more about the racial injustice that they are faced with. He helps Cassie many times to understand why some things are done. ...read more.

Lillean bragged about her little coloured friend in front of her friends, but when they were alone she confided her secrets about the boy she had passionately loved for the past year and the things she had done to attract his attention; the secrets of the girls she couldn't stand as well as those she could; and even a tidbit or two about her older brothers romantic adventures. Cassie used this to her advantage by luring Lillean out to the woods, she then dropped the books she'd been carried and told Lillean that she was tired of carrying them. They then fought and Cassie was more clever and beat Lillean. She made it clear to Lillean that if she told anyone what had happened she would tell her fancy friends how she keeps a secret and how Cassie a nine year old girl beat her up. This incident shows that Cassie thought out the perfect revenge and kept with it for months. Cassie stood up for her beliefs, which to me shows she's the heroine of this book. Fatimah Zahra Rattansey 25/02/02 Year 10g ...read more.