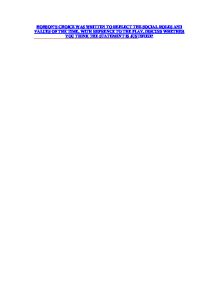 HOBSON'S CHOICE WAS WRITTEN TO REFLECT THE SOCIAL ROLES AND VALUES OF THE TIME. WITH REFRENCE TO THE PLAY, DISCUSS WHETHER YOU THINK THE STATEMENT IS JUSTIFIED?

HOBSON'S CHOICE WAS WRITTEN TO REFLECT THE SOCIAL ROLES AND VALUES OF THE TIME. WITH REFRENCE TO THE PLAY, DISCUSS WHETHER YOU THINK THE STATEMENT IS JUSTIFIED? The play 'Hobson's Choice' was written by Harold Brighouse in modern society but set in the Victorian times. It was written to reflect the social roles and values of its time. Social roles are duties, position, responsibilities or tasks that are expected of an individual by the public or a group of people while values are standards or principles considered important in life. Social roles and values was more of a belief and an integral part of the Victorian society and culture, therefore Brighouse understood the importance of social roles and value during this time and therefore exploits this principle and idea by creating characters that juxtapose the conventional customs and as a result comedy is produced. During the Victorian times, men were more favoured in every area of life because they were treated with more respect and honour compared to women. Also, status and class was very important during the Victorian times because it was believed that status was a 'thing of inheritance' and once you are born with it, you are destined to die with it and for this reason, the higher class ...read more.

Maggie takes advantage of a higher-class customer by challenging his dignity and authority by saying "its time you had a new pair" of shoes "...these uppers are disgraceful for a professional man to wear". At first Albert is reluctant to give in because he was in the shop for different reason - to admire his secret fianc�e. However he reconsiders the thought of someone of his calibre and class wearing a worn out shoe and so he gives in. This depicts that the Victorians were very conscious about their way of life and they always made sure that their living reflected their status. The audience are also revealed to Hobson's undisturbed attitude to life in general when he finished his breakfast when he says, "Maggie, I'm just going out for a quarter of an hour" and Maggie replies "if you stay more than an hour in the Moonrakers inn-", Hobson instantaneously replies "Moonrakers"? Who said-?" This shows that both his daughters and other characters in the play know Hobson's Values and they can predict Hobson's actions. "If you ruin your dinner, it'll be your own fault" - Vickey indirectly tells hers father that if he destroys or abuses his reputation "dinner" he should be blamed as they know that their father never accepts his faults but instead he blames it on other characters. ...read more.

At first he sees her and doesn't want her to come in but because of her wealth he had no choice than to let her in. The audience sense a change in status when Hobson greets her respectfully "Good Morning Mrs Heptworth, what a lovely day" and he "places a chair for her". The audience also observe that other characters call Hobson by his first name unlike Mrs Heptworth who is regarded as "Mrs" which gives a hint that she is very influential. Hobson degrades himself by "kneeling and fondling her foot". It was a principle that lower class always respected and appreciated the higher class. However, the audience would find this hilarious because men regardless of their status would consider themselves more dignified than women as they were entitled to voting and education while women were not. The change in heights also shows a change in Status because slaves were meant to kneel, go lower or bow down to their kings. At this point, the respect and honour the audience have for Hobson is lost due to his irregular character - one moment he's asserting and establishing his authority and the next he is diminishing the authority that's not even been recognised. ...read more.