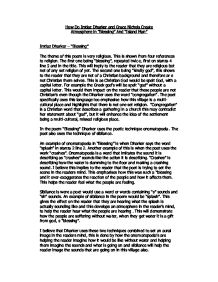 How Do Imtiaz Dharker and Grace Nichols Create Atmosphere in "Blessing" And "Island Man" Imtiaz Dharker - "Blessing" The theme of this poem is very religious. This is shown from four references to religion. The first one being "blessing", repeated twice, first on stanza 4 line 5 and in the title. This will imply to the reader that they are religious but not of any set religion of yet. The second one being "kindly god", this shows to the reader that they are not of a Christian background and therefore are not Christian them selves. This is as Christian God would be spelt God, with a capital letter. For example the Greek god's will be spelt "god" without a capital letter. This would then impact on the reader that these people are not Christian's even though the Dharker uses the word "congregation". The poet specifically uses this language too emphasise how this village is a multi-cultural place and highlights that there is not one set religion. "Congregation" is a Christian word that describes a gathering in a church this may contradict her statement about "god", but it will enhance the idea of the settlement being a multi-cultural, missed religious place. In the poem "Blessing" Dharker uses the poetic technique onomatopoeia. The poet also uses the technique of sibilance. An example of onomatopoeia in "Blessing" is when Dharker says the word "splash" in stanza 2 line 2. Another example of this is when the poet uses the work "crashes". Onomatopoeia is a word that imitates the sound it is describing as "crashes" sounds like the action it is describing. ...read more.

In "Blessing" the value of water is also a them, this is shown by how the villagers value the water form the pipe as it is scarce in their village/town, were as in Island Man values water in a different perspective as he has grown up around water and feels it is a part of him. Freedom is a main theme and it is shown by how Island Man had sacrificed his freedom for a better quality of life in some ways. One of these ways being living quality but he has sacrificed what he loves, the sea and water for a repetitive boring life in London. He feels as if everything is too crowded and he is becoming claustrophobic. Were as in "Blessing" the theme of freedom is in the opposite sense, it shows how the children are innocent by how they are playing and living for the moment. Cultural displacement is shown by how Island Man is lonely and how his life is on repeat every day, where as in "Blessing" there is a sense of community togetherness and the children having freedom running around playing and how Island Man is on his own and is homesick. Grace Nichols was born in Georgetown, Guyana in 1950. She grew up their and became a teacher and a journalist. She then emigrated to the UK and is a very well known and famous poet. The dedication of the poem Island Man will imply that the Island Man is misplaced. Evidence to support this point is when Grace Nichols suggests he is of mixed nationalities when she writes "Caribbean Island Man in London". ...read more.

This implies a sanctuary were all the sounds of the outside would be muffled. "Muffling" will imply that he may be muffling into the waves/creases in this pillow. Grace Nichols chooses the phrase "his crumpled pillow waves". I believe this is the best example of how Island Man is homesick and how he feels alienated in both societies. This is because Grace Nichols wants us to think of the crumples in the pillow being the peak of the waves in the middle of the clear blue Caribbean Sea. This gives the effect on the reader that when he is falling asleep all he is thinking about is home, the Caribbean therefore he is dreaming of home and is hearing sounds in London and relating them to sounds at home. For example "the sounds of the blue surf" is really the "dull North Circular roar". He hears sounds in real life and they are interpreted as sounds he wants them to be in his dreams. On the last line of Grace Nichols states a very strong and very blunt phrase, "Another London day". This is the most effective line in the poem. This is because it emphasises the monotonous feeling that Island Man has been experiencing. It is very blunt and straight to the point which makes it effective. This shows how repetitive London life is and how Island Man dreams of being in the free Caribbean. Although "Blessing is about freedom and gain, "Island Man" is about freedom and loss. A mutual theme is water and it is emphasised in two different ways. They both create different atmospheres using different and similar poetic techniques. I feel that "Blessing" is a more effective poem and has more context surrounding it. ...read more.