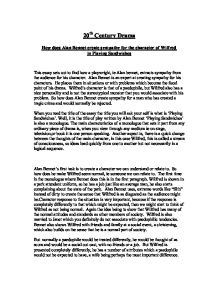 How does Alan Bennet create sympathy for the character of Wilfredin Playing Sandwiches?

20th Century Drama How does Alan Bennet create sympathy for the character of Wilfred in Playing Sandwiches This essay sets out to find how a playwright, ie Alan bennet, extracts sympathy from the audience for his character. Alan Bennet is an expert at creating sympathy for his characters. He places them in situations or with problems which become the focal point of his drama. Wilfred's character is that of a paedophile, but Wilfred also has a nice personality and is not the stereotypical monster that you would associate with his problem. So how does Alan Bennet create sympathy for a man who has created a tragic crime and would normally be rejected. When you read the title of the essay the title you will ask your self is what is 'Playing Sandwiches'. Well, it is the title of play written by Alan Bennet 'Playing Sandwiches' is also a monologue. The main characteristics of a monologue that sets it part from any ordinary piece of drama is, when you view through any medium ie on stage, television,or book it is one person speaking. Another aspect is, there is a quick change between the thoughts of the main character, in this case Wilfred, this is called a stream of consciousness, so ideas lead quickly from one to another but not necessarily in a logical sequence. ...read more.

Bennet now uses a humourous reaction towards this instead of him being angry and upset. This is done to show Wilfred's good natured acceptance of the situation. It allows the audience to sympathise with him much more easily than if Wilfred became angry. "The priest lad looks as if to that wheels aren't part of the job description when Yvonne spots Grandpa Greenwood who's just been to spend a penny and say's, "he'll do". The priest says, "isn't he a bit on the old side?" Yvonne says, "no he isn't. He still goes ballroom dancing." So it ends up being him. I Said to Janet, "At least baby Lorraine won't have any problems with the Military Twostep" After Wilfred has been caught for assaulting Samantha, Wilfred thinks he is not guilty and tries to blame other things, i.e. "It was the rain that did it because i had being given the band stand a wide berth all week" when he is forced to go back to the bandstand because of it, the bandstand is where Sam and her mother sit. Two dramatic devices are used one is repetition, this is where the character keeps bring up the same idea again and again. The other is soliloquy style. Soliloquy allows the audience a closer insight to character through their thoughts. ...read more.

Wilfred has a desire to be alone and isolated, this is use of soliloquy and dramatic irony. We sympathise because we realise that it is too late for him. The damage is done. Also it is ironic that he is totally isolated and alone but it is not the way he would prefer. Wilfred is seen in despair as well in the very end stage direction, the use of fade and use of vocabulary all play their part in a memorable ending. The fade here emphasises the isolation as Wilfred is engulfed in darkness. Alan Bennet's stage directions leave the audience with the harrowing sound of Wilfred crying. A very difficult situation not to have sympathy for. AB has succeeded in creating sympathy for Wilfred, by firstly developing Wilfred to have similar emotions and feelings to yourselves therefore making him seem normal and easy to relate to. He then throughout the monologue builds on the sympathy we feel for Wilfred and then secures it in the last scene with a powerful and moving ending to the play which gives the audience a lasting impression of Wilfred to think about afterwards. AB uses this monologue to contrast the man against the crime, i.e. you get to know Wilfred before knowing the crime therefore you see the human behind the inhuman acts. This is also what Bennet is suggesting about the police, social services and the other poisoners because all they could see is the crime, not the man behind them. ...read more.