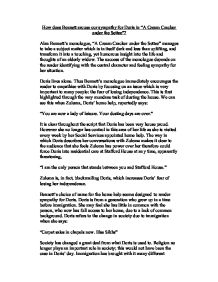 How does Bennett arouse our sympathy for Doris in &quot;A Cream Cracker under the Settee&quot;?

How does Bennett arouse our sympathy for Doris in "A Cream Cracker under the Settee"? Alan Bennett's monologue, "A Cream Cracker under the Settee" manages to take a subject matter which is in itself dark and less than uplifting, and transform it into a touching, yet humorous insight into the life and thoughts of an elderly widow. The success of the monologue depends on the reader identifying with the central character and feeling sympathy for her situation. Doris lives alone. Thus Bennett's monologue immediately encourages the reader to empathise with Doris by focusing on an issue which is very important to many people: the fear of losing independence. This is first highlighted through the very mundane task of dusting the house. We can see this when Zulema, Doris' home help, reportedly says: "You are now a lady of leisure. Your dusting days are over." It is clear throughout the script that Doris has been very house proud. However she no longer has control in this area of her life as she is visited every week by her Social Services appointed home help. The way in which Doris describes her conversations with Zulema makes it clear to the audience that she feels Zulema has power over her therefore could force Doris into residential care at Stafford House at any time, apparently threatening, "I am the only person that stands between you and Stafford House." Zulema is, in fact, blackmailing Doris, which increases Doris' fear of losing her independence. ...read more.

Bennett's script allows Doris to voice her own fears and also to remind the audience of their own concerns regarding un spoken fears of incontinence and dementia, both associated with old age. "They all smell of pee. And daft half of them, banging tambourines." Doris is probably scared of ending up like the people she describes. In Doris' mind this is what is going to happen to her if she ends up in Stafford House. This is the last thing in the world she wants to happen to herself; therefore Doris is determined to stay independent in order to keep her sanity. In order to feel sympathy for a character the reader must be able to identify with them. In this monologue, Doris tells of her deceased husband Wilfred. She speaks in terms that will be familiar to many. Whilst it is clear that Doris feels great affection for Wilfred, there is also the under current of bickering which is common in many long-term relationships. Whilst disagreements such as "the growing mushrooms in the cellar saga" may be trivial, Bennett creates a rush of sympathy for Doris when we learn of the death of her baby. If this in itself was not enough, even though Doris explains the facts of what happened on that sad day so long ago in matter of fact terms, this does not disguise the hurt she clearly feels at the cold behaviour of the midwife who treated her still born child, and Doris, with such disrespect when she, "Wrapped him in newspaper as if he was dirty" Even Bennett's description of the pram, which stood in the hallway, speaks of promises left unfulfilled. ...read more.

In this final act, perhaps Doris is able to recover some of the freedom of choice and independence that has been lacking in her life through recent times. Whilst readers may not choose to agree with Doris' actions, few could fall but to admire her courage and to sympathise with her unfortunate situation. Bennett's message is very powerful throughout the monologue. The end leaves the audience feeling guilty that they part of that modern day society who could help someone just like Doris, but fail to find the time of day to fulfil their desired actions. Bennett skilfully includes aspects of an elderly person's life that are very close to the heart in order to make the audience aware of the very real situation. Before reading "A Cream Cracker Under the Settee" I did not realise why elderly members of the community I know are so stubborn about certain modern day issues such as immigration. I can now see why they find it hard to accept modern day society moral issues that I would not even class as an issue that needs to be raised. As the light effectively fades on the final scene, Bennett has transformed, in the space of a few short pages, the character of a crotchety old woman into that of a real person with depth of character and strength of personality. Doris has become known to us all as a person with thoughts, problems, and fears similar to our own. By the end, even though she sometimes appears to be too stubborn for her own good, the audience cannot help but sympathise with Doris as her life draws to a close before our eyes. ...read more.