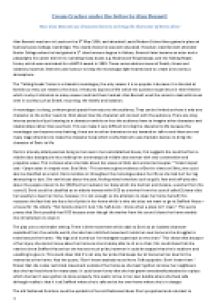 How does Bennett use dramatic devices to bring the character of Doris alive in &quot;A Cream Cracker Under the Settee&quot;?

﻿Cream Cracker under the Settee by Alan Bennett How does Bennett use dramatic devices to bring the character of Doris alive? Alan Bennett was born in Leeds on the 9th May 1934, and attended Leeds Modern School then gained a place at Sydney Sussex College, Cambridge. This clearly shows he was well educated. However, Alan Bennett attended Exeter College where he had gained a 1st class honours degree in History. Bennett later became an actor and a playwright; his career led him to narrating many books e.g. Madness of King George, and the Talking Heads Series, which was nominated for a BAFTA award in 1989. These series address issues of Death, illness and isolation; however, Bennett uses humour to keep the monologue light hearted and to create a less serious atmosphere. The ?Talking Heads? Series is a dramatic monologue; the only reason it is so popular is because it is directed at families so they can relate to the show, it features aspects of life which the audience experience in their lifetime which is why it attracted so many viewers and had them hooked. Alan Bennett used the series to deal with issues seen in society such as Death, mourning, the elderly and isolation. A monologue is a long, uninterrupted speech from actor to the audience. They can be limited as there is only one character so the writer needs to think about how the character will connect with the audience. There are long intense periods of just listening to a character ramble on thus the audience have to imagine other characters and relationships rather than see them. ...read more.

This further proves that the old fashioned furniture in her home could be symbolic of her old fashioned ideas. The furniture reflects her personality and brings her to life. ?The gates open again. Bang bang bang all morning.? This could show that because the gate is ?banging on? as if it is talking, she is able to reply to it which brings her to life. Bennet uses this inanimate object to allow Doris to act on something which allows her to become more alive and also could prove that she has OCD as she wants the gate to be shut, could show she wants everything to be perfect. The music suits the character as it creates a calm relaxing atmosphere which relaxes the reader and prepares for the long intense periods of speech. The music relates to the age and era that Doris is from which brings us back to her being old fashioned and unwilling to change. At the beginning of the monologue the music reflects the mood as it creates a calm atmosphere and setting. In moments of tension the music softens the sad but calm and serene environment, the music makes sure the monologue is not too depressing as it livens the atmosphere when needed, this also livens Doris. The music starts when Doris begins to talk about her child ?John?. ?The midwife said he wasn?t fit to be called anything,? at this point Doris is becoming emotionally unstable; the music starts and reflects the mood of Doris and emphasises the heart-rending atmosphere. ...read more.

Every time the screen goes to black we see a new scene, we wonder what has happened and how did it happen; this makes audience concentrate on setting thus bringing Doris to life as it shows her pride. It shows this as Bennett does not show her having to crawl around the house he keeps that hidden so Doris maintains her pride hence making her more alive as a character. This monologue addresses issues of isolation of the elderly along with consistent themes of loneliness, regret, remorse and sadness which each affected different audiences. The authorial intent could have been that not to abandon people and also that the elderly find it very difficult to adapt. This message has been given several times throughout the monologue and I believe that Bennett did success in making the character of Doris seem alive as the ?Talking Heads? Series was a massive hit. Doris?s independence and rejection of the outside world is show even today so people could relate to the novel and understand the feelings of Doris, this would make them emotionally attached to the monologue thus making it such a popular series. Bennett could have faced experiences like this in the past which is why he had decided to write this monologue with such feelings and emotions. I believe that without humour the monologue ?A Cream Cracker under the Settee? would have left audiences psychologically distressed so Bennett ingeniously created a lighter, less tense mood therefore pleasing the audience and making it a huge hit even in the present day. ...read more.