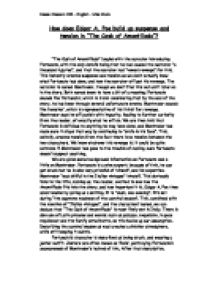 How does Edgar A. Poe build up suspense and tension in The Cask of Amontillado?

How does Edgar A. Poe build up suspense and tension in "The Cask of Amontillado"? "The Cask of Amontillado" begins with the narrator introducing Fortunato, with the only details being that he had caused the narrator "a thousand injuries", and that the narrator had "vowed revenge" for this. This instantly creates suspense and tension as we don't actually know what Fortunato has done, and how the narrator will get his revenge. The narrator is named Montresor, though we don't find this out until later on in the story. Both names seem to have a bit of a meaning; Fortunato sounds like 'fortunate', which is ironic considering that by the end of the story, he has been through several unfortunate events. Montresor sounds like 'monster', which is representative of his thirst for revenge. Montresor says he will punish with impunity, leading to further curiosity from the reader, of exactly what he will do. We are then told that Fortunato is oblivious to anything he may have done, and Montresor has made sure it stays that way by continuing to "smile in his face". This, weirdly, creates tension from the fact there is no tension between the two characters. We know whatever his revenge is; it could be quite extreme if Montresor has gone to the trouble of making sure Fortunato doesn't suspect anything. We are given some background information on Fortunato and a little on Montresor. ...read more.

Montresor tries to hint to Fortunato that he has made Montresor unhappy; "you are happy, as once I was". However, this could be unrelated to what Fortunato did to him. Montresor makes Fortunato more helpless in the catacombs, by offering wine. This obviously reduces Fortunato's awareness level, making us further suspenseful, knowing Montresor could do just about anything at this point in the story. Montresor continues to toy with Fortunato, saying "I drink to your long life". At this point, we still have no idea how Montresor is actually going to kill him, though we can assume it won't just be a normal death, because it wouldn't fit with Montresor's sick and clever ways. Montresor explains that his family were once "great and numerous", maybe hinting that his current situation means he is not as respected as the rest of his family were. His family arms represent "the foot crushes a serpent rampant whose fangs are embedded into the heel", or to rephrase it; someone who causes us harm will come out of it in a worse state, which is obviously reminiscent of what Montresor is doing. And the motto is "Nemo me impune lacessit" - meaning 'no one provokes me with impunity'. The bells of Fortunato's costume are mentioned again, which I believe is trying to show how Fortunato was a fool not to see an underlying message in what Montresor just told him. ...read more.

Montresor "forced the last stone into its position". He says that "for half a century no mortal has disturbed them. In pace requiescat!" The Latin phrase means 'rest in peace'. This gives us hints, yet still leaves us in mystery. We don't know why Montresor is recalling this event 50 years on, it could be an explanation to the authorities, a confession, or it could be as sick and shallow as showing off. After the story is finished, Edgar A. Poe still leaves much to the imagination. We still don't know what Fortunato did, why Montresor is recalling this, and if he actually regrets it. He continuously refers to Fortunato as his friend, and doesn't seem to regret it, and doesn't try to hide anything that he did, so what could it possibly be for? To the authorities he would of course try to hide something, in a confession he would feel completely regretful, that only leaves boasting. If it is that, it seems like a sick, sick thing. But from what we have read we can't expect much less from Montresor. In conclusion, Edgar A. Poe builds and maintains suspense and tension in "The Cask of Amontillado" through character development, setting, language and dialogue, but most of all; he builds tension through the ever mounting mystery. It is what has made people wonder, be disturbed, scared and shocked by "The Cask of Amontillado", still to this day. Hassan Bassam 10R - English - Miss Meek ...read more.

There is some useful analysis here, with some telling and well supported points. Some vague guesses as to the origin and significance of words point to an inadequacy of background research and there is too much plot synopsis. The conclusion takes us little further down the path of understanding Poe's methods.