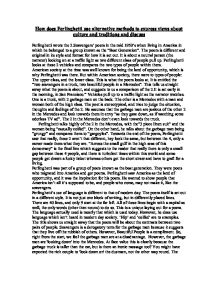 How does Ferlinghetti use alternative methods to express views about culture and traditions and discuss.

How does Ferlinghetti use alternative methods to express views about culture and traditions and discuss Ferlinghetti wrote the 2 Scavengers' poem in the mid 1950's when living in America in which he belonged to a group known as the "Beat Generation". The poem is different and original in its style and format for how it is set out. It is about a neutral person (the narrator) looking on at a traffic light as two different class of people pull up. Ferlinghetti looks at these 2 vehicles and compares the two types of people within them. American society at the time was well known for being the land of opportunity, which is why Ferlinghetti was there. But within American society, there were to types of people: The upper class, and the lower class. This is what the poem looks at. ...read more.

Towards the end of the poem, Ferlinghetti saw that really, these 2 aren't that different, hey look the same, but between the 4, only a career made them what they are. "Across the small gulf in the high seas of this democracy" is the final line which suggests to the reader that really there is only a small gap between these 4 people, and there is turbulent times within this world and some people get drawn a lucky ticket whereas others get the short straw and have to graft for a living. Ferlinghetti was part of a group of poets known as the beat generation. They were poets who migrated into America and got poems. Ferlinghetti saw America as the land of opportunity, and it was the inspiration for his poem. He wanted to show people that America isn't all it's supposed to be, and people who come, may not make it, like the scavengers. ...read more.

So, right from the start, we feel the garbage men are at a disadvantage. However, the garbage men are 'looking down' into the Mercedes. At face value this is clearly because the garbage truck is taller than the car, but is there an ironic message too? You might have expected the rich couple to 'look down on' the dustmen, not the other way round. The poem is written in the present tense. This gives a sense of immediacy - we feel that the poem is happening now. From a wider perspective, it also suggests that the huge gap between rich and poor is a problem now, too. There is also the use of alliteration when he describes the 2 in the Mercedes as the 'cool couple' and 'casually coifed'. The poem is an original poem, and studies the different views of an Italian living in America when people saw it as the land where hopes and dreams could come true. It was a stereotypical view of American society and an interpretation by Ferlinghetti, as no words were actually spoken. ...read more.