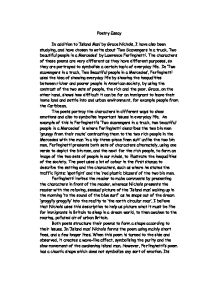 In addition to 'Island Man' by Grace Nichols, I have also been studying, and have chosen to write about 'Two Scavengers in a truck, Two beautiful people in a Mercedes' by Lawrence Ferlinghetti

Ferlinghetti presents both sets of characters alternately, using one verse to depict the bin men, and the next for the rich people, to form an image of the two sets of people in our minds, to illustrate the inequalities of the society. The poet uses a lot of colour in the first stanza to describe the setting and the characters, such as where he states the traffic lights; 'spotlight' and the 'red plastic blazers' of the two bin men. Ferlinghetti invites the reader to make comments by presenting the characters in front of the reader, whereas Nichols presents the reader with the relaxing, sensual picture of the 'Island man' waking up in the morning 'to the sound of the blue surf' as he snaps out of the dream 'groggily groggily' into the reality to 'the north circular roar'. ...read more.

In 'Island man' Nichols forms the poem using mainly short lines, and a few longer lines. When this poem is turned to the side and observed, it creates a wave-like affect, symbolising the purity and the slow movement of the awakening island man. However, Ferlinghetti's poem has a chaotic shape which does not symbolize any sort of emotion. Its form fits in with the 'beat culture', as Ferlinghetti was from a group of poets who experimented with different shapes and structures. Both poems use stanzas but for different purposes. Ferlinghetti uses them to show the different images in the poem, almost like a story board, whereas Nichols uses the stanzas to portray the gradual awakening of the island man, almost as if peeling off a layer of sleep and dream with each new stanza. ...read more.