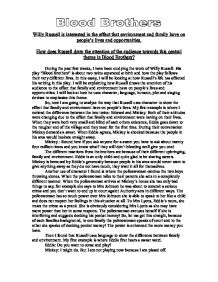 How does Russell draw the attention of the audience towards this central theme in Blood Brothers?

Willy Russell is interested in the effect that environment and family have on people's lives and opportunities. How does Russell draw the attention of the audience towards this central theme in Blood Brothers? During the past few weeks, I have been studying the work of Willy Russell. His play "Blood Brothers" is about two twins separated at birth and how the play follows their very different lives. In this essay, I will be looking at how Russell's life has affected his writing in this play. I will be explaining how Russell draws the attention of his audience to the effect that family and environment have on people's lives and opportunities. I will look at how he uses character, language, humour, plot and staging devises to emphasise this theme. So, now I am going to analyse the way that Russell uses character to show the effect that family and environment have on people's lives. My first example is where I noticed the difference between the two twins: Edward and Mickey. Both of their attitudes were changing due to the effect that family and environment were having on their lives. When they were both very small and blind of each others existence, Eddie goes down to the rougher end of the village and they meet for the first time. During their conversation Mickey demands a sweet. When Eddie agrees, Mickey is shocked because the people in his area would hesitate straight away. ...read more.

Now, I am going to analyse the use of humour Russell uses to emphasise the way that family and environment effect peoples lives. My initial example is where Eddie is advising Mickey what to say when he asks Linda out. Eddie: Linda my loins are burning for you. Let me lay my weary head on your warm breast; Linda, I love you, I want you, the very centre of my being calls out for you! Eddie's environment has obviously affected the way that he could just think of something to say which is very romantic. You could not imagine Mickey saying such things. Eddie is more confident and knows how to use his vocabulary well in order to get people to do things. When Mickey tries to, his outcome is abysmal. Mickey: Erm...er, well the thing is the centre of my... being cries out for...erm, my knees, loins are...(snaps) Linda for Christ's sake will you go out with me? Linda agrees. Mickey cannot find the right words to say even if he is told what to say. Mickey's vocabulary is retarded because of his environment. His school is worse than Eddie's so he tries to copy Eddie but still cannot do that. I put this under humour because I thought it was quite funny but it could also go under language as both of the boys language has been affected by their environment. ...read more.

At the play it showed the brothers in completely different houses. One at the rough end of the village and the other at the very high end of social environment. They live in different ways and houses because of their environment. Their family either reduces the opportunity to live in a high class house or improves the opportunity. There are certain changes in the acted story, the first being where Mickey helped his brother complete a crime which went wrong. People in Mickey's environment often resort to this as they need the money, but people in Eddie's environment would never be constrained to doing this sort of thing as they always have money. When Mickey went to jail he had to be put on anti-depressants to help him cope with the stress and loneliness of prison. This was the final straw for Mickey because all of his life he had been pushed to the limit craving for food and money, lots of things also go wrong in Mickey's environment. When he finally reached confinement he felted that was enough. If Eddie had been placed in jail he would probably be able to cope as he has had less to put up with than Mickey but would most likely be bailed anyway! I conclude that every little detail which Willy Russell has put into his well crafted book, and performance, has something to do with family and environment. Because of his own experiences he was able to complete the task of writing this book and include very graphic details of how family and environment effects peoples everyday lives and opportunities. ...read more.