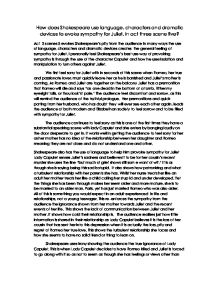 How does Shakespeare use language, characters and dramatic devices to evoke sympathy for Juliet, in act three scene five?

How does Shakespeare use language, characters and dramatic devices to evoke sympathy for Juliet, in act three scene five? Act 3 scenes 5 evokes Shakespeare's pity from the audience in many ways the use of language, characters and dramatic devices creates the general feeling of sympathy for Juliet. I personally feel Shakespeare's best use way of provoking sympathy is through the use of the character Capulet and how he uses isolation and manipulation to turn others against Juliet. We first feel sorry for Juliet with in seconds of this scene when Romeo, her true and passionate lover, must quickly leave her as he is banished and Juliet's mother is coming. As Romeo and Juliet are together on the balcony Juliet has a premonition that Romeo will die and says "as one dead in the bottom of a tomb. Either my eyesight fails, or thou look'st pale." The audience feel discomfort and sorrow, as this will remind the audience of the truthful prologue. Her premonitions and quick parting from her husband, who has doubt they will ever see each other again, leads the audience of both modern and Elizabethan society to feel sorrow and to be filled with sympathy for Juliet. ...read more.

Juliet cannot persuade her mother and Capulet a very dominant and un-persuasive man is unlikely to come around either. Lady Capulet is much like saying I can't do it you must do this yourself. This is the first sign of isolation in this scene where Lady Capulet joins Capulet with anger for Juliet. This isolation will make the audience feel sorry for her because they will realise just how alone she is, as it always seemed her mother was on the fence but now she has left her. Juliet is already distraught and Capulet comes and immediately is filled with anger, he refers to Juliet as she whilst with Lady Capulet as though patronizing her like she is not in fact there. He speaks above her as though she is a child yet we see clearly from this scene that when he does not get the happy family he so desires he throws a tantrum as though a little child. Capulet's hope of a happy family may be to out do the Montague family. As they are "both alike in dignity" yet they both fight to be better, whether it be the better servants or the more wealth it seems as though everything is a competition and the order and marital status of their only daughter appears to also be a competition. ...read more.

An Elizabethan may feel she should accept her place being less in control and understanding how she is to marry and bare children. We are also sickened be Capulet's abuse and use of women and how he feels his s*x makes him dominant of the household the shakespearian audience may feel this the norm also as the globe theatre in those days was more populated by men. This scene, I feel, is a turning point in the play it is where a risking but generally joyus life is catapulted to a suicidal mad town of fear, devastation and realisation of the things expected of a girl so young yet perceived as so old. From when she is spoken over like a child yet expected to marry and commit like many people do in there late life-wise twenties. Not only does this scene evoke sympathy for Juliet s does it for the nurse and lady capulet and all others under the reign of Capulet's dominating power. We realise that it is from these fatal loins of the two family's that the true sadness and forbidden love of two star cross'd lovers and their tragic tale form and create one of the greatest love stories of all time. ...read more.