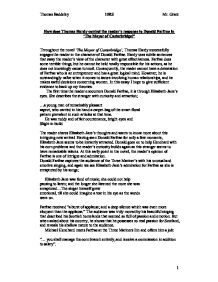 How does Thomas Hardy control the reader's response to Donald Farfrae in 'The Mayor of Casterbridge?'

How does Thomas Hardy control the reader's response to Donald Farfrae in 'The Mayor of Casterbridge?' Throughout the novel 'The Mayor of Casterbridge', Thomas Hardy successfully engages the reader in the character of Donald Farfrae. Hardy uses subtle sentences that sway the reader's view of the character with great effectiveness. Farfrae does some terrible things, but he cannot be held totally responsible for his actions, as he does not knowingly cause turmoil. Consequently, the reader cannot have a detestation of Farfrae who is an entrepreneur and has a great logical mind. However, he is outstandingly na�ve when it comes to issues involving human relationships, and he makes awful decisions concerning women. In this essay I hope to give sufficient evidence to back up my theories. The first time the reader encounters Donald Farfrae, it is through Elizabeth-Jane's eyes. She describes the stranger with curiosity and attraction; ...a young man of remarkably pleasant aspect, who carried in his hand a carpet-bag of the smart floral pattern prevalent in such articles at that time. He was ruddy and of fair countenance, bright-eyes and Slight in build The reader shares Elizabeth-Jane's thoughts and wants to know more about this intriguing new arrival. Having seen Donald Farfrae for only a few moments, Elizabeth-Jane seems to be instantly attracted. Donald goes on to help Henchard with his corn problems and the reader's curiosity builds again as this stranger seems to have remarkable talents. At this early point in the novel, the reader's opinion of Farfrae is one of intrigue and admiration. Donald Farfrae captures the audience of the Three Mariner's with his unusual and emotive singing, and again we see Elizabeth-Jane's admiration for Farfrae as she is enraptured by his songs; Elizabeth-Jane was fond of music; she could not help pausing to listen; and the longer she listened the more she was enraptured...The singer himself grew emotional, till she could imagine a tear in his eye as the words went on. ...read more.

Farfrae does not deal in this fashion; he is calm and calculated, with every decision carefully planned, which makes him the superior businessman. We know that Farfrae's decision to use the corn-drill is the correct one historically, given the increasing mechanisation of agriculture in the 19th century. However the reader instinctively sympathises with Henchard and his increasingly obsolete but picturesque methods. The book has the title 'The Mayor of Casterbridge', which refers to both Henchard and Farfrae, as Farfrae indeed becomes the mayor and Henchard, after many public disgraces, lives by himself in a small cottage at the edge of town. Farfrae becomes everything that Henchard was, and more. The reader is angry at Farfrae for causing this. However, the reader has respect for Farfrae, because he refuses to take Henchard's clients as he does not want to bankrupt Henchard, even after the unfair firing he received. Farfrae acknowledges the opportunities and friendship that Henchard had previously provided him with, and does not seek retribution for the unfairness he received. This lets the reader see that he is a decent man and has unintentionally brought trouble to Henchard. Farfrae again shows his good-nature when Henchard makes a quarrelsome comment after Farfrae had respectfully stopped singing when he came near a family that had just lost the father; "Do you care so very much about hurting folk's feelings!" observed Henchard with a half sneer. "You do, I know - especially mine!" "I am sorry if I have hurt yours, sir," replied Donald standing still, with a second expression of the same sentiment in the regretfulness of his face. "Why should you say it - think it?" Farfrae shows that he is sorry for any pain he has caused and highlights the fact that he does not mean to cause trouble. The incident with the gifts of furniture underlines how Farfrae in essence stole Henchard's wealth, but it also underlines Farfrae's ignorance of people's feelings. ...read more.

said Farfrae. "Ye've wished to long enough!" The audience sympathises with Farfrae as he does not deserve to be brutally murdered by his best friend. The full title of the novel is as follows; THE LIFE AND DEATH OF THE MAYOR OF CASTERBRIDGE A STORY OF A MAN OF CHARACTER The title "The Mayor of Casterbridge" could describe either Henchard or Farfrae, but this full title could only be describing Henchard as Farfrae cannot be described as a man of character. Farfrae shows short bursts or emotion but he does not seem to have the ability to show true passion. The audience warm to Henchard, as he has character, and again distance themselves from Farfrae. He becomes the rival of both Henchard and the reader Farfrae is an intelligent young man that can do tremendous things with business, and possesses qualities that are very admirable. He also has a strange effect on people that seems to draw them to him. With these incredible virtues, it seems surprising that his personality is riddled with many unattractive traits. He is very shallow and seems unable to comprehend the emotions of distress, compassion and love. He is very na�ve about human emotions and relationships, and though he is not the cause, he is an element of Michael Henchard's downfall. Farfrae makes one decision after another, which are good decisions in themselves, but have terrible consequences for Henchard. But through all of this turmoil he causes, he is completely innocent. He was simply being true to himself and does not mean to cause trouble. It is for this very reason that the audience cannot loathe Farfrae, as he is simply obtuse about certain areas of life. The audience do dislike him, but there is not a good enough reason to really detest him. I believe Thomas Hardy has created a complex character that brings out a wide range of responses from different people but I hope I have given substantiation to what opinion of Farfrae I think Hardy was trying to communicate to the audience. Thomas Baddeley 10RS Mr. Grant 1 ...read more.