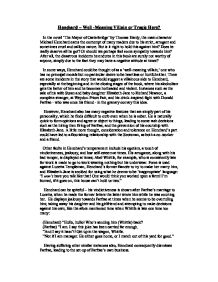 Henchard - Well -Meaning Villain or Tragic Hero? In the novel 'The Mayor of Casterbridge' by Thomas Hardy, the main character Michael Henchard earns the contempt of many readers due to his strict, arrogant and sometimes cruel and callous nature. But is it right to hold this against him? Does he really deserve all he got? Or should we perhaps feel some sympathy towards him? After all, the disastrous incidents he endures in this book are surely not worthy of anyone, simply due to the fact they may have a negative attitude at times? In some ways, Henchard could be thought of as a 'well-meaning villain,' one who has no principal morals but no particular desire to be heartless or hurtful either. There are some incidents in the story that would suggest a villainous side to Henchard, especially at the beginning and in the closing stages of the book, where his alcoholism gets the better of him and he becomes hotheaded and violent. Instances such as the sale of his wife Susan and baby daughter Elizabeth-Jane to Richard Newson, a complete stranger, at Weydon-Priors Fair, and his drink-inspired fight with Donald Farfrae - who was once his friend - in the granary convey this idea. ...read more.

he realises what he has done and goes straight about trying to find her - and swearing an oath, by the Bible, to stop drinking in the immediate future: " I, Michael Henchard.... do take an oath before God...that I will avoid all strong liquors for the space of twenty-one years to come..." We are not told what exactly Henchard goes through in the 19-year gap in the story - the time between his selling of his family and their return after Newson's supposed death - but it would seem that although he has been unsuccessful in his quest to find his wife he has managed to keep to his vow: "They don't fill Mr Henchard's wine glasses.... he sware a gospel oath in bygone times and has bode by it ever since." Of course, it is not possible for Susan to have heard about this in her absence, but on her return when she sees what he has become she is obviously more than impressed, even in awe of Henchard: "I don't think I can meet Mr Henchard. He is not what I thought he would be - he overpowers me!" Presumably, Henchard will have worked extremely hard to have turned his life around from about the lowest possible position he could be in to the highest likewise. ...read more.

Henchard's devotion to Elizabeth-Jane is, incidentally, the only reason for his admittedly heartless lie to Newson about her being dead - he just cannot bear to lose the only person still caring for him. However, again he feels bad about it and on Newson's return lets them alone, resolving to leave Casterbridge. As to Henchard's rash, spur-of-the-moment decisions, I consider this his flaw - every 'Tragic Hero' has a defect and I fear that this is his. He does not think much about his decisions at all, and this he why he has so many regrets. For example - if he had thought of the long-term effects of dismissing Farfrae, they may have continued to work together still and Farfrae would never have taken over. If he had not stopped the courtship of Farfrae and Elizabeth-Jane, Farfrae would never have considered marrying Henchard's fianc�e. If Henchard had not lied to Newson about Elizabeth-Jane's death, the latter would not have turned against him in the end. In conclusion, I find that, despite all the things Henchard has done wrongly, I feel a great deal of compassion and sympathy towards him. He is a good and honourable man who has lost everything, due to his impetuousness; which I feel is not directly a fault of his own. It is, however, this defect that leads to his downfall, and, in my opinion, earns him the title 'Tragic Hero.' ...read more.