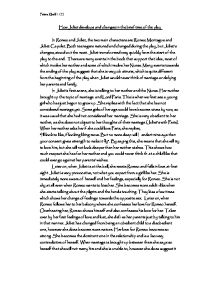 How Juliet develops and changes in the brief time of the play In Romeo and Juliet, the two main characters are Romeo Montague and Juliet Capulet. Both teenagers matured and changed during the play, but Juliet's changes, stood out the most. Juliet transformed very quickly from the start of the play to the end. There are many events in the book that support that idea, most of which involve her mother and some of which involve her Nurse. Many events towards the ending of the play suggest that she is very obstinate, which is quite different from the beginning of the play when Juliet would never think of marriage or defying her parents and family. In Juliet's first scene, she is talking to her mother and the Nurse. Her mother brought up the topic of marriage and Lord Paris. This is when we first see a young girl who has just begun to grow up. She replies with the fact that she has not considered marriage yet. Some girls of her age would have become wives by now, so it was usual that she had not considered her marriage. ...read more.

Overhearing her, Romeo shows himself and also confesses his love for her. Taken over by her first feelings of love and lust, she defies her parents just by talking to him in that manner. Juliet has changed from being an obedient child to a disobedient one, however she does become more mature. Her love for Romeo becomes so strong. She becomes the dominant one in the relationship and is also very contradictive of herself. When marriage is brought up between them she says so herself that she will not marry him and she is unable to, however she does suggest it so he proposes to her at the balcony. They arrange to get married the next morning. It all is thought of very sudden. There are not many signs here of Juliet's changes however there is a big change in her personality and maturity in Juliet which starts to develop and grow on her. When Juliet finds out about Romeo killing Tybalt she is very upset, even more upset when she hears of Romeo's banishment. Juliet had become disobedient as she arranged to get married with Romeo without telling her parents and she is very anxious when the nurse goes to ask Romeo when they are getting married. ...read more.

This story is a tragedy therefore we know what happens and that Juliet kills herself when she sees Romeo dead after drinking a potion. This 'suicidal' step, which she took, was very big, as she had only just been telling her mother a while ago that she and not even considered marriage and after that she married Romeo and had to face the consequences. She took a big step of faking death and then stabbing herself after seeing Romeo dead by her side. I think that Juliet matured from being an immature girl to a dedicated strong willed wife, killing herself for her husband. She went through many problems and decision making times where she made the decision which was right for her. She turned into a disobedient child and had the Nurse by her side until the point when she was told to marry Paris by everyone. She was left on hr own to make decisions and ended up committing suicide. This could have been stopped by Friar Lawrence however it was not. The drastic changes Juliet went through in such a short amount of time shows how powerful love is. Fatma Khalil 11H ...read more.