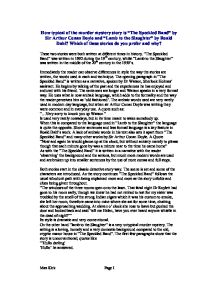 How typical of the murder mystery story is &amp;#147;The Speckled Band&amp;#148; by Sir Arthur Conan Doyle and &amp;#147;Lamb to the Slaughter&amp;#148; by Roald Dahl? Which of these stories do you prefer and why?

How typical of the murder mystery story is "The Speckled Band" by Sir Arthur Conan Doyle and "Lamb to the Slaughter" by Roald Dahl? Which of these stories do you prefer and why? These two stories were both written at different times in history. "The Speckled Band" was written in 1892 during the 19th century, whilst "Lamb to the Slaughter" was written in the middle of the 20th century in the 1950's. Immediately the reader can observe differences in style the way the stories are written, the words used in each and technique. The opening paragraph in "The Speckled Band" is written as a narrative, spoken by Dr Watson, Sherlock Holmes' assistant. He begins by talking of the past and the experiences he has enjoyed and endured with his friend. The sentences are longer and Watson speaks in a very formal way. He uses what is now archaic language, which adds to the formality and the way the reader perceives him as 'old fashioned'. The archaic words used are very rarely used in modern day language, but when sir Arthur Conan Doyle was writing they were common and in everyday use. A quote such as: "...Very sorry to knock you up Watson " Is used very rarely nowadays, but in its time meant to wake somebody up. ...read more.

and Holmes replies "No, but I observe the second half of a return ticket in your left glove. You must have started early, yet you had a good drive in a dog cart, along heavy roads before you reached the station." After hearing this Miss Stoner looks at Holmes in bewilderment. This displays his extraordinary intelligence for attention to detail and immediately gives the reader the impression that Holmes is a very skilled detective. The actions by Miss Stoner from the scene she enters in and onwards are uneasy and wary of her surroundings and the people she talks to. "It is not cold that makes me shiver Mr Holmes, it is fear..." This is also very predictable in victims and people in need of help in murder mysteries. Another character in the story is Dr Watson, Watson is the sidekick of Holmes, this is now almost necessary in a murder mystery to escalate the intelligence of the main detective. His status as a doctor makes the reader think of him as very intelligent but when compared to Holmes he seems to be of standard intelligence and this increases Holmes' reputation of being smart. ...read more.

The false clues really help the reader try to work out who has committed the murder and even how the murder was carried out. I preferred "Lamb to the Slaughter" to "The Speckled Band" because it was unconventional when compared to the usual murder mystery storyline. Although Sir Arthur Conan Doyle created the image of the murder mystery with his Holmes and Watson books, his storyline was appealing but not quite as much as Roald Dahl's because of the complexity of the clues and the way Holmes and Watson think. The Archaic language also made it harder to understand and much harder to read than "Lamb to the Slaughter" because having to find out what a dog cart was or what certain phrases meant slowed the flow of reading down. The ending in "Lamb to the Slaughter" was unexpected and what I thought was the opposite of what actually happened. I thought Mrs Maloney would have broken under the pressure of the detectives because she killed her husband, who at the start of the story she had great affection for. "Lamb to the slaughter" was satisfying to read and put a smile on my face when I read the ending. "The Speckled Band" was Satisfying to read because of the suspense involved but less satisfying because of its length for a short story. ?? ?? ?? ?? Max Kirk Page I ...read more.