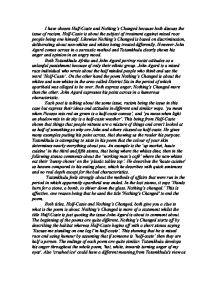 I have chosen Half-Caste and Nothing's Changed because both discuss the issue of racism.

I have chosen Half-Caste and Nothing's Changed because both discuss the issue of racism. Half-Caste is about the subject of treatment against mixed race people being one himself. Likewise Nothing's Changed is based on discrimination, deliberating about non-whites and whites being treated differently. However John Agard comes across in a sarcastic method and Tatamkhulu clearly shows his anger and opinion in an angry mood. Both Tatamkhulu Afrika and John Agard portray racist attitudes as a unlawful punishment because of only their ethnic group. John Agard is a mixed race individual who wrote about the half minded people who think and use the word 'Half-Caste'. On the other hand the poem Nothing's Changed is about the whites and non-whites in the area called District Six in the period of which apartheid was alleged to be over. Both express anger, Nothing's Changed more than the other. John Agard expresses his point across in a humorous characteristic. Each poet is talking about the same issue, racism being the issue in this case but express their ideas and attitudes in different and similar ways. 'yu mean when Picasso mix red an green is a half-caste canvas', and 'yu mean when light an shadow mix in de sky is a half-caste weather'. ...read more.

'linen falls, the single rose' and 'take it with you, eat it at a plastic table's top' are quotes taken out of the 5th and 6th stanza which describes the two eating places. He develops this anger through the poem to the last stanza showing his feelings. On the other hand Half-Caste has more of an unusual structure. All the stanzas have no similar numbers of lines, ranging from three to twenty six, although the structure does complement the poem. The second stanza being twenty six lines gives numerous examples of the different things in the world being a mixture. Following that the third and fourth build up to the short fifth and sixth three line stanza turning round the poem showing that it isn't him that is half a person but the ones that are biased are. Both structures of the poem are quite different but both do use the structure as a climax. Both poems create different moods maybe because of the period of time. Also Nothing's Changed is more serious. Half-Caste has both a humorous and questioning mood. 'Ah listening to yu wid de keen half of mih ear' makes you think that it is ridiculous and wonder they are not half a person. ...read more.

It is also in a Caribbean dialect. John exploits the phrase 'Explain yuself wha yu mean'. He emphasises his point by having a none stop twenty six line stanza which clarifies all his various fusions in life which are a mixture like 'half-caste canvas'. In contrast Nothing's Changed uses the structure as a approach to get his key features at certain points. 'No sign say it is but we know here we belong' is isolated into a two line stanza. John Agard in a manner has an absolutely different way of expressing his key points. In conclusion both Half-Caste and Nothing's Changed has very serious issues in which they write about. Both being from the party in which are being attacked. Being from different time periods makes it slightly diverse. Tatamkhulu has been influenced by his culture and background in the way that there were only non-whites and whites in that particular area. Taking that into consideration most non-whites would have despised all whites thinking all of them would be against them so the anger in his poem would explain that. Whereas John's culture and background does have some bearing on his opinion but he in fact knows that not everyone would think of him as half a person to another human being or any other mixed race individual. ...read more.