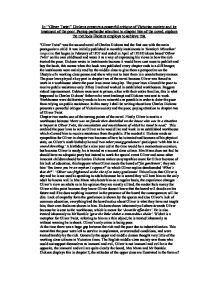 In (TM)Oliver Twist(TM)(TM) Dickens presents a powerful critique of Victorian society and its treatment of the poor. Paying particular attention to chapter two of the novel, explore the methods Dickens employs to ac

In ''Oliver Twist'' Dickens presents a powerful critique of Victorian society and its treatment of the poor. Paying particular attention to chapter two of the novel, explore the methods Dickens employs to achieve this. "Oliver Twist" was the second novel of Charles Dickens and the first one with the main protagonist a child. It was initially published in monthly instalments in 'Bentley's Miscellan' magazine that began in February of 1837 and ended in April of 1939.Dickens based 'Oliver Twist' on his own childhood and wrote it as a way of expressing his views in how the rich treated the poor, Dickens wrote in instalments because it would have cost more to publish and buy the book, this means when the book was published every chapter ends in a cliff-hanger, the instalments were mainly read by the middle class to give them a perspective on the lifestyle of a working class person and show why not to treat them in a unsatisfactory manner. The poor laws played a key part in chapter two of the novel because Oliver was forced to work in a workhouse where the poor laws came into play. The poor laws allowed the poor to receive public assistance only if they lived and worked in established workhouses. Beggars risked imprisonment. Debtors were sent to prison, often with their entire families, this is what happened to Charles Dickens' father as he went bankrupt and Dickens was sent to work. Workhouses were deliberately made to be as miserable as possible in order to deter the poor from relying on public assistance. ...read more.

'The beadle drew himself up with great pride, and said, ''I inwented it.' Mr Bumble considers himself important and thinks he is intelligent for coming up with the system for naming unknown children as the passage indicates. Dickens portrays the two in a comical manner. Mrs Mann is shown as this masculine woman who is the contrast of a motherly role, but closer to a neglectful fatherly role. The name Mrs Mann is ironic as because she acts masculine and has the word 'Mann' in her name. Mrs Mann is greedy and she is taking money that should be spent on the children's food., 'she appropriated the greater part of the weekly stipend to her own use' .She uses hypocrisy in her actions, 'she put her apron to her eye', and this is to make a tear come out, for her to look good in front of authority as high as Mr Bumble, to make him think she does not abuse the orphans. She uses the method of flattery towards Mr Bumble by saying 'Why, you're quite a literary character, sir!' even though she is being sarcastic. Mr Bumble is depicted as a 'fat' and 'over indulged man' he is not a good Christian because of his over indulgence, it is also ironic because he starves the children and punished Oliver when he 'asked for more'. Dickens symbolizes Mr Bumble as the pretentious, self-important beadle, an insignificant church official for the workhouse where Oliver is born. Though Mr. ...read more.

The narrator depicts this using descriptive methods to make us side with Oliver, the author uses an unbiased narrator to make the novel level on both of the social classes. Dickens portrays the stipulations the 'paupers' have to survive with, in a deep manner, to get the reader on the side of the poor in an unbiased way. The author introduces stereotypical middle and upper class characters, who over indulge and are rich contrasted to the poor in the form of Oliver's cares and the board. To make to novel less serious, Dickens uses humour techniques, like hypocrisy, sarcasm and irony when the situation becomes too acute, the techniques are mostly used with the comical characters such as the board. The author tries to make the audience understand and develop ideas of how horrendously the poor are treated, he wants the audience to form ideas of how to help the poor and improve themselves. We are also introduced to the unique style of Dickens characterised by using the narrator to voice is own opinions in some parts of 'Oliver Twist.' In my view Dickens's is a good satirist with, he employs unique techniques of describing the upper/middle classes and voicing his own opinions through the narrator gaining the readers attention. Finally, chapter two is also significant because it begins Oliver's story, one which will see him meet many different classes of people and gain an insight to how they live and how his life is different from the orphanage and the workhouse. Oliver will understand how hypocritical many of the rich are, and begin the journey of finding his true family. ...read more.