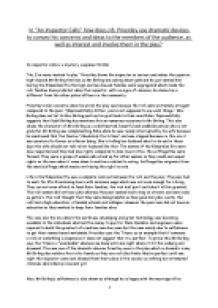 In An Inspector Calls how does J.B. Priestley use dramatic devices to convey his concerns and ideas to the members of the audience, as well as interest and involve them in the play?

﻿In ?An Inspector Calls? how does J.B. Priestley use dramatic devices to convey his concerns and ideas to the members of the audience, as well as interest and involve them in the play? An inspector calls is a mystery, suspense thriller. ?No, I?ve never wanted to play.? Priestley shows the inspector as serious and makes the superior, high-classed Mr Birling feel low, as Mr Birling was asking about gold and he just denied him. During the Edwardian Era the high and low classed families were segregated which made the rich families have pride but when the inspector, with no signs of remorse, he claims he is different from the other police officers in the community. Priestley?s main concerns when he wrote the play was because the rich were extremely arrogant compared to the poor. ?(Reproachfully) Arthur, you?re not supposed to say such things-? Mrs Birling does not let Arthur Birling portray his gratitude to their maid Edna. ?Reproachfully? suggests that Sybil Birling has mentions this on numerous occasions to Mr Birling. This also shows the character of Mrs Birling as a cold-hearted, boastful and snobbish person who is not grateful. Mr Birling was complimenting Edna while he was rudely interrupted by his wife because he mentioned that the food as ?Absolutely First-Class? and was stopped because in this era it was unnatural to favour an inferior being. She is telling her husband what to do and in those days the wife should not talk to her husband like that. The women of the Edwardian Era were less respected and they had less rights compared to men. Due to this, the suffragettes were formed. They were a group of women who stood up for other women so they could earn equal rights as the men when it came down to matters related to voting. ...read more.

The lighting used at the beginning is described as "pink and intimate" showing a 'warm' and 'joyful' atmosphere. The pink suggests the love between Gerald and Sheila. However the audience gets the sense that it is just a screen covering up secrets and that they are in fact looking through 'rose-tinted glasses' and that it is not really what it seems. This is confirmed when the Inspector appears and the lighting changes to a "brighter and harder light" where it gives the impression of exposure and the revelation of truth which spoils the mood of their celebratory meal. The bright, hard colours show the solid personality of the inspector. The use of the doorbell as a sound effect during the play had a major role which also had an effect on the audience as it was unexpected while a family dinner at the Birlings was going on. It gives the audience a sense of curiosity and suspense; you just want someone to quickly open the door to see who it is. The doorbell interrupted their important dinner so it had to be somebody important, and we further come to notice it is someone unexpected when the narrator says, ?We hear the sharp ring of a front door bell. Birling stops to listen.? The narrator has emphasised the fact the Mr Birling, does not know who?s at the door and is slightly surprised. ?Sharp? suggests the doorbell should be noticed, and it was loud, portraying that a hurricane was about to hit them. The arrival of the inspector shocks the Birlings as they at this moment did not have a tiny clue of what they have been visited by the police. ...read more.

Priestley uses a variety of different methods to interest and involve the audience within the play is by using many different dramatic devices. These were dramatic irony, cliff hangers, tension, short sentences, confession and many more. All these build up suspense for the audience which engages them to carry on until they find out what happens as many different thoughts can pop up. Priestley also used other methods for example sound effects when the inspector rang the doorbell making the Birlings confused and frozen. Furthermore, he uses character entrances and exits which were vital in the play as it was set in the one room. Moreover, minor detail such as the lighting played an important role giving the audience different thoughts within them. Lastly, he shows about the past and the majority of act one was related about the past. The fact that a meaningful message is represented would indicate that An Inspector Calls, as well as being a murder mystery, in the way that Priestley uncovers the story of the death of Eva Smith, is also a moralistic play. Priestley shows the audience how not to live their lives, using dramatic devices to demonstrate this. He makes the audience contemplate over the fact that they are actually "members of one body" and that they are all "responsible for one another" and has made them realise that socialism is the way forward instead of capitalism. In this way, An Inspector Calls is very relevant today's society where people still do need to work together and help others in need. J.B.Priestley effectively uses many dramatic devices in An Inspector Calls, such as symbolism and timings. He applies them in order to portray his political views, using an upper class, Edwardian family to do so. ...read more.