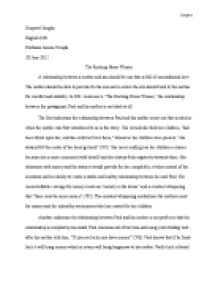 In D.H. Lawrence's, &quot;The Rocking-Horse Winner,&quot; the relationship between the protagonist, Paul and his mother is not ideal at all.

﻿Sangha Gurpreet Sangha English 01B Professor Jeanne Temple 28 June 2012 The Rocking Horse Winner A relationship between a mother and son should be one that is full of unconditional love. The mother should be able to provide for the son and in return the son should look to the mother for comfort and stability. In D.H. Lawrence's, "The Rocking-Horse Winner," the relationship between the protagonist, Paul and his mother is not ideal at all. The first indication the relationship between Paul and his mother is not one that is ideal is when the mother was first introduced to us in the story.. She reveals she feels her children, "had been thrust upon her, and she could not love them," whenever her children were present, "she always felt the center of her heart go hard" (592). ...read more.

Paul's luck is found when he rides his rocking horse and is sure of which horse to bet on. When his uncle asks what he is going to do with the money Paul unselfishly responds by saying, "' I started it for mother. She said she had no luck...so I thought if I was lucky, it might stop whispering'" (598). Even though he knows his mother doesn't care for him he still goes through all the trouble in trying to give her happiness. The one-sided relationship is shown again when Paul anonymously gives his mother "a birthday present of a thousand pounds for five successive years" (598). When his mother discovers her generous gift her face hardens and she becomes expressionless (599). She is not at all grateful for the gift, instead of wondering where the money came from she is more occupied with receiving the money all at once (599). ...read more.

He tries to convince her by saying, "'Mother did I ever tell you. I'm lucky'" (602). His mother responds cold heartedly by saying, "'No you never did'" (602) even though he actually did. Some may say that his mother did actually care for him and her love changed for him in the end, when she had, "sudden seizures of uneasiness about him...[and] wanted to rush to him at once and know he was safe"(600). However, she doesn't actually care for him because she shows no emotion of his death. Paul's relationship with his mother was not ideal at all. His mother provided an unhealthy environment for him with her obsession with money. Paul believed if he could provide his mother with money it would appease her unhappiness and she would approve and nurture him like a mother should. Irony plays a major role in the end because instead of luck bringing Paul happiness it initially brought him to his death bed. ...read more.