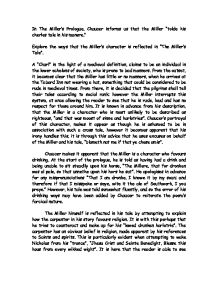 In The Miller's Prologue, Chaucer informs us that the Miller "tolde his cherles tale in his manere." Explore the ways that the Miller's character is reflected in "The Miller's Tale". A "Churl" in the light of a medieval definition, claims to be an individual in the lower echelons of society, who is prone to bad manners. From the outset, it becomes clear that the Miller has little or no manners, when he arrives at the Tabard Inn not wearing a hat, something that could be considered to be rude in medieval times. From there, it is decided that the pilgrims shall tell their tales according to social rank; however the Miller interrupts this system, at once allowing the reader to see that he is rude, loud and has no respect for those around him. It is known in advance from his description, that the Miller is a character who is most unlikely to be described as righteous, "and that was moost of sinne and harlotries". ...read more.

It is with this perhaps that he tries to counteract and make up for his "lewed drunken harlotrie". The carpenter has an obvious belief in religion, made apparent by his references to Saints and spirits. This is particularly evident when attempting to wake Nicholas from his "trance", "Jhesu Crist and Seinte Benedight, Blesse this hous from every wikked wight". It is here that the reader is able to see John's limited knowledge of religion, when he mixes up his prayers "where wentestow, Seinte Petre soster?" making it seem that carpenters are ignorant. The Miller also laughs at the expense of all those who attempt "courtly love", making Absolon seem ridiculous in his attempts to gain the hand of Alisoun, who is again not the stereotypical ideal of a medieval damsel, this in itself a dig at those women on pilgrimage who may not be of such an "ideal" of a woman. It was common in medieval times for Miller's to be dishonest or crafty, claiming that they would take the best crops for themselves "wel koude he stelen corn and tollen thries", and in this case charge three times as much for produce. ...read more.

This way of portraying the carpenter could quite easily be taken as a sarcastic remark attempting to provoke the "Reve". As his tale of trickery and deceit unfolds, it would appear that the Miller takes side of Nicholas in his tale, commenting on the carpenter's "fastansie" and the fact that he is "sely". He has little sympathy for the carpenter, indicating that he believes there is nothing wrong or corrupt with Nicholas' pretence and cruelty to John, reiterating again, that the "Millere" is indefinitely a dishonest character himself, with few morals and no hesitation when it comes to laughing at the expense of others. It is obvious that the Miller tells a tale which coincides with his personality. It would appear that he attempts to contrast his tale with that of the Knights; creating Alisoun who is an obvious parody of the Knight's fair Emilie, and mimicking the ways of a courtly lover. Despite the ranks of social importance, it is obvious from the twists that occur in his tale that the Miller, in the face of being a churl, has understandable intelligence of the social side of life. ...read more.