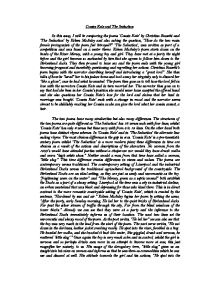 In this essay, I will be comparing the poems 'Cousin Kate' by Christina Rossetti and 'The Seduction' by Eileen McAuley and also asking the question, &quot;How do the two main female protagonists of the poem feel betrayed?&quot;

Cousin Kate and The Seduction In this essay, I will be comparing the poems 'Cousin Kate' by Christina Rossetti and 'The Seduction' by Eileen McAuley and also asking the question, "How do the two main female protagonists of the poem feel betrayed?" 'The Seduction', was written as part of a competition and was based on a water theme. Eileen McAuley's poem starts down on the banks of the River Mersey, with a young boy and girl. They have met at a party the night before and the girl becomes so enchanted by him that she agrees to follow him down to the Birkenhead docks. They then proceed to have sex and the poem ends with the young girl becoming pregnant and inevitably questioning and regretting her actions. Christina Rossetti's poem begins with the narrator describing herself and introducing a "great lord". She then talks of how he "lured" her to his palace home and took away her virginity only to discard her "like a glove", once he had what he wanted. The poem then goes on to tell how the lord fell in love with the narrators Cousin Kate and in turn married her. The narrator then goes on to say that had she been in her Cousin's position she would never have accepted the offered hand and she also questions her Cousin Kate's love for the lord and claims that her hand in marriage was bought. 'Cousin Kate' ends with a change in mood and the narrator seems almost to be childishly mocking her Cousin as she can give the lord what her cousin cannot, a heir. The two poems have many similarities but also many differences. The structures of the two poems are quite different as 'The Seduction' has 16 verses each with four lines, whilst 'Cousin Kate' has only 4 verses but these vary with from 8 to 18 lines. ...read more.

The fact that the poem skips straight from his kiss to, "When she discovered she was three months gone," shows that the girl was either so drunk that she could hardly remember the sexual act she performs or that she finds it so humiliating and embarrassing that she eradicates it from her mind. The next line, "She sobbed in the cool, locked darkness of her room" creates a sense of imprisonment and confinement suggesting that she trapped by her dilemma. The girl then proceeds in trying to find a scapegoat, "And she ripped up all her My Guy and her Jackie photo-comics Until they were just bright paper, like confetti, strewn On the carpet. And on that day she broke the heels Of her high white shoes (as she flung them at wall)." She blames the magazines, that were the last thing she thought of before she slept with the boy, and so destroys them. They end up looking like confetti and this may show that she believes that any chances of her having the romantic marriage that the magazines promote, is now destroyed, because of the magazines. She also throws her white shoes, which were a connotation of her purity against a wall, and so breaks them. The girl now becomes, "truly, truly frightened," and feels, "cheated by the promise of it all." She sees that her life will be never be the same again and begins to regret and question her actions, "For where, now, was the summer of her sixteenth year? However her questions are much too late. The girl feels betrayed by the media and the boy and tries to pass the blame on to them, by talking of, "glamour with a stammer; Full of fresh fruit diets-how did she feel betrayed? Now with a softly rounded belly, she was sickened every morning. By stupid stupid promises, only tacitly made." ...read more.

Just as the girl from 'The Seduction' blames the boy and the media, so the narrator blames the Lord and her Cousin Kate. They are both within their rights to feel betrayed as the two male protagonists do seduce and entrap them both. The boy from 'The Seduction' entraps the girl with the aid of alcohol and false dreams and ideas of romance created by the media. On the other hand the Lord uses actual romance and words of promise to get what he wants. The end product is still the same whatever method of seduction they use. Both women are left alone as outcasts to deal with their pregnancies and they are also left to deal with lost dreams of fictional romances. They feel betrayed; by the things they felt they could most trust. The narrator would feel that if she could trust anybody it would be her family and the girl from 'The Seduction' should have been able to trust the magazines, which promote trust as one of the key elements in any relationship. The title 'The Seduction' tells the story of the two poems by itself. The term seduction actually means to manipulate and persuade and to create false ideas, which is what the boy does indeed do to the girl in order to gain sexual gratification. However, had the girl had the strength of mind to refuse to go down to the docks with him, she would never have slept with him and become pregnant. Nor would the narrator have slept with the Lord and perhaps he might have then married her instead. Both of the two female protagonists do slightly bring things on themselves by agreeing to go with the men in the first place, however had they known what would happen, had they seen reality, instead of romance they might not have considered going to the docks or the Lord's palace home. Both women's lives are destroyed due to allowing themselves to be seduced by their own dreams and fancies so much that they lose sight of reality. Bina -Rough Draft ...read more.