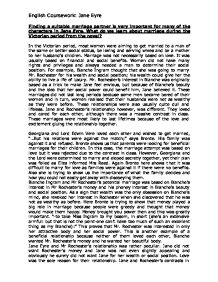 In the Victorian period, most women were aiming to get married to a man of the same or better social status, be loving and serving wives and be a mother to her husband's children. Marriage was not necessarily based on love. It was usually based on financial and social benefits. Women did not have many rights and privileges and always needed a man to determine their social position. For example, Blanche Ingram thought that she was going to marry Mr. Rochester for his wealth and social position; his wealth could give her the ability to live a life of luxury. Mr. Rochester's interest in Blanche was originally based as a trick to make Jane feel envious, but because of Blanche's beauty and the idea that her social power could benefit him, Jane believed it. These marriages did not last long periods because some men became bored of their women and in turn, women realised that their husbands were not as wealthy as they were before. These relationships were also usually quite dull and lifeless. Jane and Rochester's relationship however, was different. They loved and cared for each other, although there was a massive contrast in class. These marriages were most likely to last lifetimes because of the love and excitement gluing the relationship together. Georgiana and Lord Edwin Vere loved each other and wished to get married, "...But his relations were against the match;" says Bronte. ...read more.

However Jane has other ideas; from her perspective, this is the exact opposite of what she wants. It is almost as if Rochester is trying to change Jane to be of a higher class like him. Bronte shows this when Rochester calls Jane "Janet" as a symbol that he is trying to change her. Bronte again shows great symbolism when Rochester proposes to Jane. At the start of the chapter, Bronte sets the scene with: "A splendid Midsummer shone over England: skies so pure, suns so radiant as were then seen in long succession." Then as the chapter brings to a close, and Rochester and Jane have confessed their love, a storm breaks out. Herr, Bronte shows us what the future has in store for Rochester and Jane, indicating that their decision to wed was unwise. In the same chapter, Bronte uses further symbolism. After the emergence of the storm, a bolt of lightening splits the tree at which Jane and Rochester were sitting earlier that evening. That tree symbolises Jane and Rochester's relationship. They have a strong base of love, but as you get further up the tree, they are going in two different directions and dissimilarity in class is pulling them apart. Before the tree had been split Rochester said "...here is the chestnut tree: here is the bench at its old roots. ...read more.

Bronte displays that after you find true love, like Jane found Rochester, it is difficult to see yourself with anyone else. In the Victorian era, marriage was extremely important for beneficial reasons. People married for social benefits and for wealth. Men looked for women who had what they didn't have, for example a wealthy man looked for a woman with a high social position. Marriage for love was very scarce because it was not easy to make money if you didn't have much at the start, so people looked to marry someone wealthy who would make life easier for them. Once you had money, you had power and your social status would also begin to rise. Instead of waiting to emerge as a socially powerful person, people married people who were already socially powerful in order to gain their power. In poorer families, more marriages are for love because of you cannot live wealthy lives you might as well live a happy one. I think what Bronte was trying to say about marriage that was very different depending on what every person wants. She shows this to us by giving different examples of love and marriages like Jane and Rochester and Blanche and Rochester. English Coursework: Jane Eyre Finding a suitable marriage partner is very important for many of the characters in Jane Eyre. What do we learn about marriage during the Victorian period from the novel? ...read more.