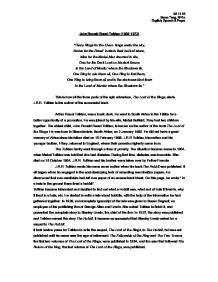 John Ronald Reuel Tolkien (1892-1973) "Three Rings for the Elven- kings under the sky, Seven for the Dwarf- lords in their halls of stone, Nine for the Mortal Men doomed to die, One for the Dark Lord on his dark throne In the Land of Mordor where the Shadows lie. One Ring to rule them all, One Ring to find them, One Ring to bring them all and in the darkness bind them In the Land of Mordor where the Shadows lie." This is how all the three parts of the epic adventure, The Lord of the Rings, starts. J.R.R. Tolkien is the author of the successful book. Arthur Reuel Tolkien, was a bank clerk. He went to South Africa in the 1890s for a better opportunity of a promotion. He was joined by his wife, Mabel Suffield. They had two children together. The eldest child, John Ronald Reuel Tolkien, is known as the author of the book The Lord of the Rings. ...read more.

Tolkien became interested and decided to find out what a Hobbit was, what sort of hole it lived in, why it lived in a hole, etc. He started to write a tale about hobbits, with the help of the information he had gathered together. In 1936, an incomplete typescript of the tale was given to Susan Dagnall, an employee of the publishing firm of George Allen and Unwin. She asked Tolkien to finish it, and presented the complete story to Stanley Unwin, the chief of the firm. In 1937, the story was published and Tolkien named the story The Hobbit. It became so successful that Stanley Unwin asked for a sequel to The Hobbit. It took twelve years for Tolkien to write the sequel, The Lord of the Rings, to The Hobbit, but was not published until he came near the age of retirement. The Fellowship of the Ring and The Two Towers, the first two volumes of The Lord of the Rings, were published in 1954, ...read more.

When you read a book, you often make up your own characters and environment in your mind. You become very disappointed when you watch the film, because it is not like what you have always been thinking of. The characters and environment look different. The story has been shortened and it is not as entertaining and exciting. Many scenes have been taken away, and that makes you annoyed. I do not recommend people to watch a film of a book ( if you have read the book), because it destroys the whole thing. But there are some exceptions, for example, The Lord of the Rings. Even if the book is better than the film, it is worth watching anyway. The Two Towers, the second volume of the book, has its first performance at cinema on 18 December. I will definately go and watch the film. There are people, who are already waiting outside the cinema to buy tickets for the film. It proves that it is worth watching after all. 02.11.16 Mona Tang, NV1a English; Speech & Paper ...read more.