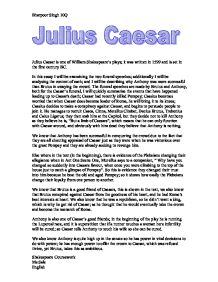 Julius Caesar is one of William Shakespeare's plays; it was written in 1599 and is set in the first century BC. In this essay I will be examining the two funeral speeches; additionally I will be analysing the content of each; and I will be describing why Anthony was more successful than Brutus in swaying the crowd. The funeral speeches are made by Brutus and Anthony, both for the Caesar's funeral, I will quickly summarise the events that have happened leading up to Caesar's death; Caesar had recently killed Pompey; Cassius becomes worried that when Caesar does become leader of Rome, he will bring it to its knees; Cassius decides to make a conspiracy against Caesar, and begins to persuade people to join it. He manages to recruit Casca, Cinna, Metellus Cimber, Decius Brutus, Trebonius and Caius Ligarus; they then stab him at the Capitol, but they decide not to kill Anthony as they believe he is, "But a limb of Caesars", which means that he can only function with Caesar around, and obviously with him dead they believe that Anthony is nothing. ...read more.

Anthony's speech is flooded with great emotion; this is the way he gets the crowd on his side. Anthony's personality does come out a little; it is his crudeness which shows the most, as he used sarcasm and irony in the speech to persuade the crowd away from Brutus' side. The two speeches varied widely, Brutus gets the crowd with simple persuasion, he does this by explaining to the Plebeians that he did what he did because it was necessary and for the good of Rome; also that he loved Rome as much as he did Caesar. He also uses the question, "If any, speak, for him have I offended;" this question is used so Brutus can check if the crowd is still on his side. He then pauses, to let the crowd speak, and he gets a positive outlook amongst the crowd. Brutus made his speech effective in persuading the people by using tone and rhetorical devices. Brutus was compassionate when referring to how he loved Caesar as much as Caesar's friends of his speech. Brutus was showing compassion on lines 18 - 20 where he said, "If there be any in this assembly, any dear friend of Caesar's, to him I say that Brutus's love to Caesar was no less than his." ...read more.

Anthony on the other hand had a real task on his hands, because not only did he have to actually persuade the crowd, he also had to keep them listening, he was aided slightly by Brutus who asked the crowd foolishly to listen to him, but the other bit was the will, which served two purposes, one was to keep the crowd listening and baited; the other was another major factor in them turning to Caesar's side once again, as in his will he gave the Plebeians his wealth and land. An Elizabethan audience would most certainly have appreciated the rhetoric more than a modern audience, due to the fact that the Elizabethans had lessons in rhetoric, so their interpretation and understanding of the speeches would have been much sharper compared to the modern type. I can conclude this essay by giving credit to the author of this wonderful play, William Shakespeare; I am crediting him because I believe that English would not be where it is now if it wasn't for people like Shakespeare. ?? ?? ?? ?? Bharpoor Singh 10Q Shakespeare Coursework Ms Sale English ...read more.