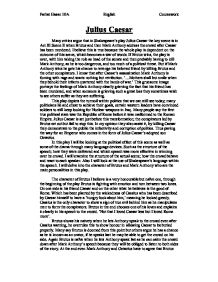 Julius Caesar Many critics argue that in Shakespeare's play Julius Caesar the key scene is in Act III Scene II when Brutus and then Mark Anthony address the crowd after Caesar has been murdered. I believe this is true because the whole play is dependent on the outcome of this scene, which becomes a war of words. If Brutus wins, the play is over, with him taking the role as head of the senate and then probably having to kill Mark Anthony, as he is too dangerous, and too much of a political threat. But if Mark Anthony wins he gets his chance to revenge his beloved friend by killing Brutus and the other conspirators. I know that after Caesar's assassination Mark Anthony is fuming with rage and wants nothing but retribution. '...Mothers shall but smile when they behold their infants quartered with the hands of war.' This gruesome image portrays the feelings of Mark Anthony clearly grieving the fact that his friend has been murdered, and when someone is grieving such a great loss they sometimes wish to see others suffer as they are suffering. This play depicts the turmoil within politics that we can still see today; many politicians lie and cheat to achieve their goals, certain western leaders have convinced soldiers to still keep looking for Nuclear weapons in Iraq. ...read more.

This will mean that the Romans will be subjects a thought very foreign until recently to a Roman as they have had a political system in place for almost five centuries, since the time of King Tarquin in 509 BC. He asks many rhetorical questions to get the crowd on his side. 'Who here is so base that he would be a bondman'. Brutus is saying that if Caesar had lived Romans would be slaves. Mark Anthony's speech is much less tactful and much more emotional, as he desires to incite the crowd into a frenzy. He comes forward as a man who has lost his best friend; from the start he shows this. 'Friends, Romans, countrymen lend me ears'. This is contrast to Brutus' beginning where he says Romans first meaning Anthony favours friends more than Romans as Romans can't be chosen and may be bad where as you can choose your friends. 'I come to bury Caesar not to praise him ' Mark Anthony chooses his words carefully as the crowd are know on Brutus' side and will not here anything against him. Anthony says 'for Brutus is an honourable man', the crowd is happy to hear that because they have said 'twere best he not speak no harm of Brutus here'. ...read more.

Brutus immediately solve the problem of hostility by halving the crowd, one half goes with Cassius to hear his speech and on with Brutus. This is perfect for the conspirators as they can address their supporters, which would have voted them into the senate. Than after a series of very skilled rhetorical questions he manages to get the crowd on his side. At this time the crowd have fully accepted Brutus' reason and are convinced that Caesar was a tyrant. The crowd only accept to hear Anthony because Brutus has asked them to. Anthony walks in to unfriendly crowd who will turn into an angry crowd if he does not choose his words carefully. For this Anthony does not say a word against Brutus but goes through Caesars good deeds. Than he asks if all those deeds were ambition, the crowd say it was not. From this the crowd get over the notion that Caesar was a tyrant. Than Anthony shows his emotion to get the crowd sympathetic, he evens gets out of the pulpit into the crowd to show the wounds. He even goes through who stabbed where but he wasn't there when Caesar was murdered. After he gets the sympathy he wants anger he does this by telling the will, and nothing stirs men as much as money by the end the crowd want nothing more than to tear the conspirators to shreds. Farhat Hasan 10A English Coursework ...read more.